Another update that had been planned for a while - in fact, I took the pictures about a week ago, but then I'd have to do several shots to cover everything so you get one set now and the other one hopefully soon. But for now, it's time to check in with the WIPocalypse for May.

The subject for this month is What were you stitching this time last year and have you finished it?, and it was quite a fun experience looking back in my blog by a year. It looks like last May I was stitching on a lot of different things, so I'll not feature everything here. In my 2015 May WIPocalypse, I was working on Dark Forces - which I just recently pulled out again since it is huge and far from finished - the Aster wedding sampler, which was almost finished then and has been given to the happy couple in the meantime - Cut Thru Cottage, where I finished two more pages, but still have three to go - and some knitting/crochet: the Soyeux-shawl has been scrapped and will be restarted at some point, the baby suprise jacket has been finished (as well as two more of those) and the Lestrona shawl has grown considerably, although I made a mistake somewhere in the last few rows and have yet to figure it out and fix it. The post that was exactly a year ago was my May DESIGN post, and that was about Glendon Place's Red Velvet Cake, which I have to admit is still in the exact same place it was back then. I'd love to work on it some more, but stuff just keeps getting in the way! Maybe I should just pull it out for s quick few stitches sometime...

Now, my current progress mostly focused on two things: One is the mysterious grandchildren project. In case you didn't guess, that diamon-structure is actually a garden fence, so there will be a ton of leaves, flowers and small animals around the borders. Here's the first piece of that: 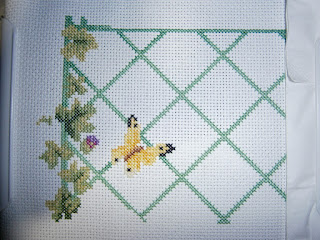 I've also done the next ten rows on the Baby blanked CAL. This time, there was a band called 'tulip stitch' because it looks like pink tulips on a meadow, and also some more granny stripes. It's getting more interesting now :) 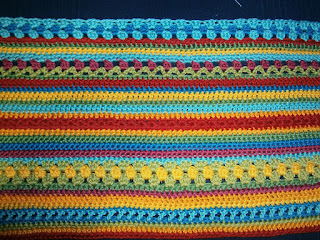 Posted by Leonore Winterer at 16:19

I'm pretty sure I've stitched that Grandchildren chart, and my Grandma was very happy with it. Unfortunately I stitched it well before my DD was born and there's no room left, but that's okay.

It's always fun to look back at a year ago, the great thing about having a blog!
Nice progress on the design for Grandma.

Great progress on both!