In my last post I teased my new crochet project, now I can tell (and show) you what it is :) The story behind it is a bit sad, though...
Last week, I read in a German knitting blog I follow that an other, pretty well known knitting blogger had died after fighting cancer for three years. I didn't follow her blog, but checked it out after, and I really regret not getting there earlier - she was wonderfully creative, with tones of ideas and projects, knit alongs and crochet alongs and from her posts and the way people talk about her now, she was a great person as well. One of the projects on her blog was a Rainbow Baby Blanket Crochet Along from a few years back, and that's what I'm doing now - for the sister of a friend of Felix, who's pregnant with her second child, but in honour of Jessica from schoenstricken, a woman I wish I'd known.

The CAL was in thirteen parts, each about ten rows in different colours and stitches, so like a crochet band sampler of sorts. There are the first ten rows, already using all eight colours - I didn't use the kit provided but picked them myself among the Schachenmayr Catania brand. The orange is a bit lighter than I'd like, but they still look pretty nice together I think :) 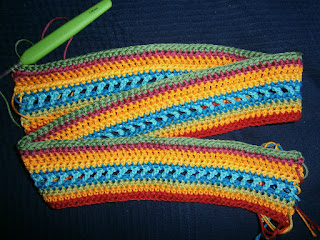 I won't continue before all the lose ends are weaved in though, I don't want to face like 300 of them in the end. But so far I'm having a lot of fun and I've already had a look at the next part and it looks like even more fun.

I also realized I forgot to show you my newst sock project; another pair for the coworker who loved the first one. I really love the colours on them (Austermann Step Summer Stripes 277) so I'm calling them my watermelon socks :) I saw these knitted on gemachtmitliebe.de a while back and just had to make them as well: 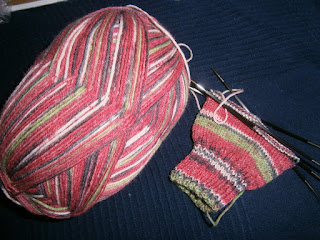 Posted by Leonore Winterer at 10:58

Nice start on both and sad about the blogger.

Nice way to remember a fellow blogger and crocheter. The colours are lovely too.