Oh my, I just realized I haven't blogged in almost a month...I'm terribly sorry! At first, there wasn't a lot to show, then I fell into the trap of 'Almost done I'll post when I have a finish to show' and then there was suddenly too much to show - very bad planning on my part! I'll do better now, though, and I won't even include WIPocalypse in this post, so I *have* to do another post after the weekend ;)

So, I did quite a bit of stitching during my time off and after, and some of it even qualifies for Gifted Gorgeousness, but to keep things chronological I'll have to mix it with some stuff that doesn't.  One thing that I did finish and that does qualify is page 2 of Kitsune. Quite a bit more of her tails is visible now, which also means quite a bit more confetti when stitching, but that's okay when it is so pretty :) Kitsune was a gift from my friend Carla, but I'll put her away for a while now to work on the next page of Dark Forces which I haven't touched in almost a year. 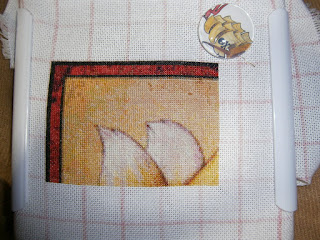 I've also been working on Link quite a bit, and finally finished him last weekend. I'm actually a bit saf now I didn't get to show him growing here, but I did have a *lot* of fun stitching him, especially the letters. I hope to get him framed this weekend so I can enter him in the stitching pirates gamer's delight contest ^_^ He's also one of the rare things I finished for myself, so he doesn't qualify for GG, but I still love him. 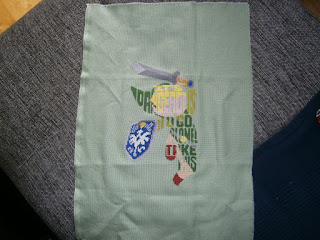 We also had two weekends at Felix' parents, so I took Lady & the Tramps with me to work on and made some decent progress as well. I've finished more than half of the page now and I moved the grid to the second half, so I hope I can work on her again soon. This was a gift from my grandparents a few years back, so another GG piece here. 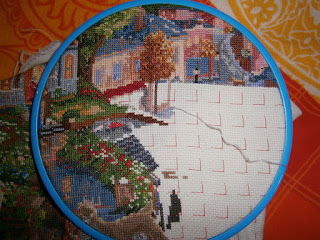 I finished Link early on IHSW, so for the video hangout with my girls - the first one for me in ages, and the very first time for us to all be there at the same time, it was a lot of fun - I pulled out 'A perfectly kept house', a small Lizzie*Kate I started before Christmas but didn't finished due to other deadline stitching. Now I thought I might as well finish it before I get back to my next bigger project. I added the flowers, the bird and the text block on the left. It's just two more lines of text on top and a few band at the very bottom, so it should be a quick finish. I'm still counting this for GG, even though after missing the original occasion has passed I'm not sure if I will still make this a gift (it was supposed to be a housewarming gift for two friends we had planned to visit on New Year's Eve). 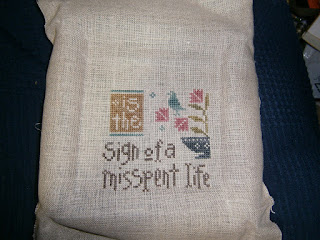 So for this weekend, my plan is to finish A perfectly kept house, and I'm also working on Dark Forces and on getting Link framed. I also have a few knitting an crochet projects either on the go or planned, so hopefully I can show some progress there as well. For know I'm just happy to be caught up here :)

Posted by Leonore Winterer at 00:06

OOOOOOOOOOOOO and AAAHHHHHHHHHHHHHHH, I hope you are feeling better now! All this pretty stitching one would never have thought you were under the weather at all :D But we know you felt puny.

I love the Lizzie Kate, but I love Lady too...and Kitsune and Link....please show me more before I explode :D

Wow I love Link! Beautiful progress on everything!

You've been working on so much!!!! I love seeing Kitusne and Dark Force again, and Link is awesome.

Great update - you have been busy! Kitsune is so pretty, what lovely colours. The gifts from your grandparents is coming along nicely too!

Great update on everything and congrats on finishing that awesome Link!

Thanks for taking part in GG this month. Love the fox tails!

ps Don't forget to link up!

Good progress on all your projects.