So after another busy weekend (busy working on our apartment, busy with friends, and busy stitching, of course!) I can say that I made it - I caught up on my one colum/week on Dark Force. Sadly, I forgot to take a picture on Saturday, so here it is with a few more stitches I put in this morning - I think I will give up on the blockwise thing and treat the column as a whole, might make for a bit more speedy progress: 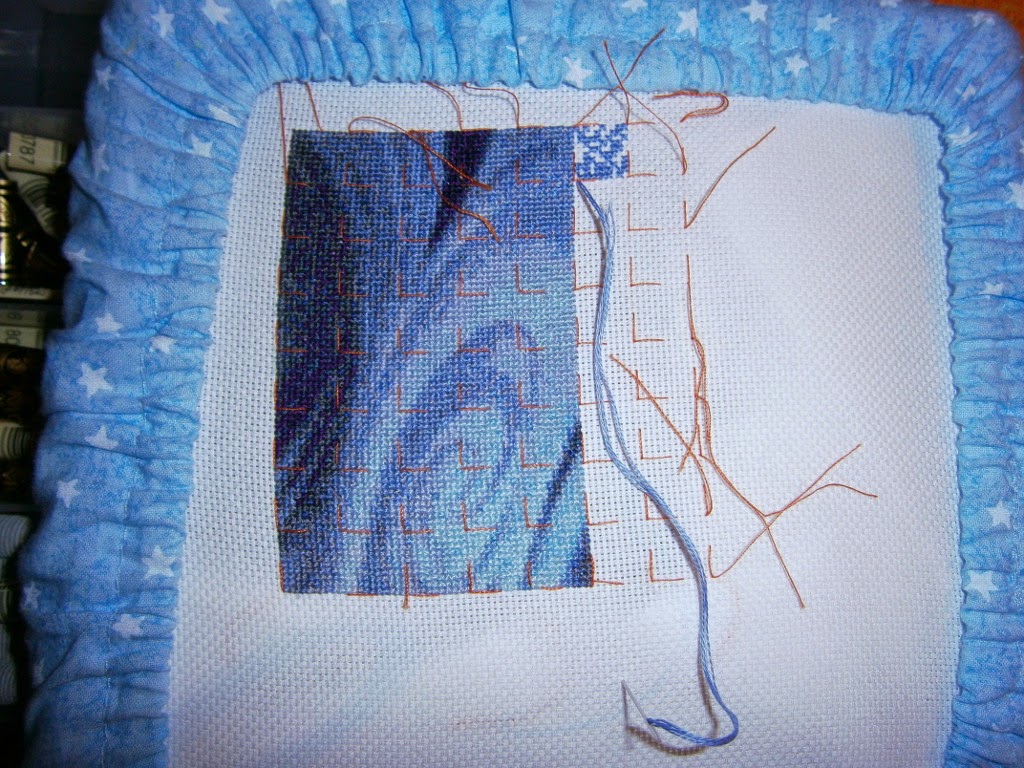 I can't relax just yet though; I will have to finish this week's column in just four days because we'll be gone for the weekend once more. But since column five was done on Saturday, I got to stitch on Cut Thru Cottage on Sunday, and finished the cross stitching on page three of Cut Thru Cottage. Only the backstitching to go now, and I hope I will finish this soon (this week possibly - though I also need to do the current band of the mystery sampler...) 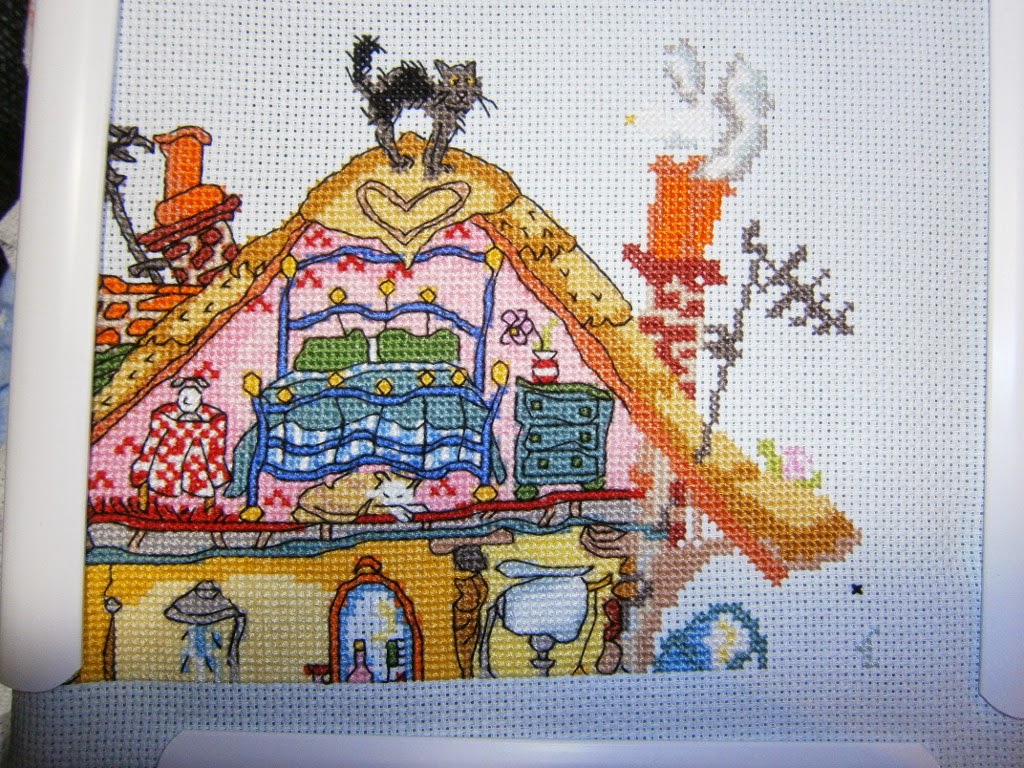 I also finished a game - Lego Batman 3 on the PS Vita, which a friend had lent me (I play so many great games, why do I only ever finish the small and goofy ones to talk about?) and of course, lots of watching happened since the last post. We saw the last episode (E24) of NCIS S11 - it was a sad one, but thankfully no cliffhanger ending this time. We also finished watching The Nanny (S6, E13- 22, and what a nice ending for a great show) and replaces it be (re)watching The Big Bang Theory (So far S1, E1-17 and S2, E1-4  - Felix knows them until S5 or so, and I only until S3). We finished S3 of The Walking Dead (S15-16) and started watching Supernatural again (S2, E14) which we had neglected for a while, but is is still epic. I also saw the last two Episodes of S3 of Scandal (E17+18) and I'm a bit confused as of where there is a S4 (not yet on amazon prime), because this would have made for quite a good ending; and I finished S1 of Castle (E8-10 - yes, I recently had a thing for finishing stuff, including several boxes of sweets) and started D4 of Haven (S1+2 so far) which seems to be taking a bit of a different direction now. There are also a few movies in the mix - first we saw Django Unchained, which we both liked a lot and which got us talking about Leonardo DiCaprio and when he became a really good actor, so we watched Catch me if you can the next day (which was the first time I noticed him, Felix obviously had skipped a few movies because his entry was Inception). Then this weekend, we watched Noah, which was new on amazon prime, and while the movie itself was quite decent, I do have a few words about that Noah character himself that I really can't write down here - such arrogance, d'uh! I was close to turning the film off. The day after that we saw The Thief Lord, a children's movie after a German book, which was much less frustrating, but the end still left a bit to desired (I'm not a huge fan of the author of this book anyway...). Phew, I should stat blogging about this kind of stuff more often really, look at this wall of text now! Okay, enough ranting, back to stitching. See you girls and guys!

Wonderful progress on both projects Leonore. I love the Cottage and have that one in my stash.

My goodness you have made some serious progress! And speaking of Leonardo Di Caprio, he actually always has been a really good actor...What's Eating Gilbert Grape was his first movie and even I thought he was a special needs person put in for that character! If you haven't seen it, It has Johnny Depp in it so that will help you locate it for watching :D

Are you finding the parking to be faster for you? You've done some really great progress with your Dark Force project. That cottage stitch is very cute. I have to look that one up.

Great progress on all the stitchy stuff!!
I love those Lego hames. Haven't played one in ages though. I watched a rerun of the Nanny the other night. Such a funny show. And of course I LOVE Castle.
Django was a good movie.... and I've not watched Noah as I've heard some very negative feedback on the movie.

Thank you! The Cottage is my first project of this series, but I think I will have to do a few more some tiem :)

According to Wikipedia, he actually played in three movies before that (probably minor roles?), but we will need to check that out, it sounds great! I only knew him from Titanic, and I was never very fond of that one...

The parking certainly was faster, but I switched tactics again to some weird cross country/parking mix now which works even better for me...I think it all depends on the pattern at hand and on the person stitching too :)

Thank you. I love the Lego games as well, I still have a few unfinished and even unplayed ones here I need to get to eventually :)
I wouldn't recommend Noah actually...I don't know what the fanbase for this is supposed to be; people that are into faith/bible stuff probably won't like how far it strays from the original story, and for everyone else is might be a tad too faith centered still...but even if you look past that, it still has some serious flaws in my opinion :/