So it's already time for the second-to-last WIPocalypse update for this year...wow, where has time gone? It really flies by, even more so if you're really busy...and busy I have been this past month! Between moving and lots and lots of university stuff and stitching and life, I hardly have time to breathe, but I can see light yet at the ends of all those tunnels, so no reason to despair! It just means I'll have to keep these blogs and stuff a little shorter than usual, so let me jump right up ahead and into the update.

The question for this month is What are your favorite and least favorite materials to use in your stitching?, and that's a good one for me to answer because I can't say a whole lot to this yet - I haven't done a lot of experimenting yet. For fabric, I think I can say that my favourite is evenweave - more even (hence the name, haha) and easier to work on then linen, much prettier in the finish than aida, escpecially if you love hand dyed fabrics (which I do!). My least favourite at this point is probably waste canvas - you can do really pretty things with it, so I won't get around using it more often, but it's a realy pain to get your stitches even and to properly attach the canvas to the fabric, I will have to do a bit more experimenting to figure that out I guess.
As for floss, I haven't worked with anything but cottons so far (not counting one pillow cover that was done with a really thik yarn like stuff, which was strange), so those will have to count as my favourites - I really like hand dyed/over dyed here as well, especially subtle color changes (although I will have to do something rainbow-y eventually!). 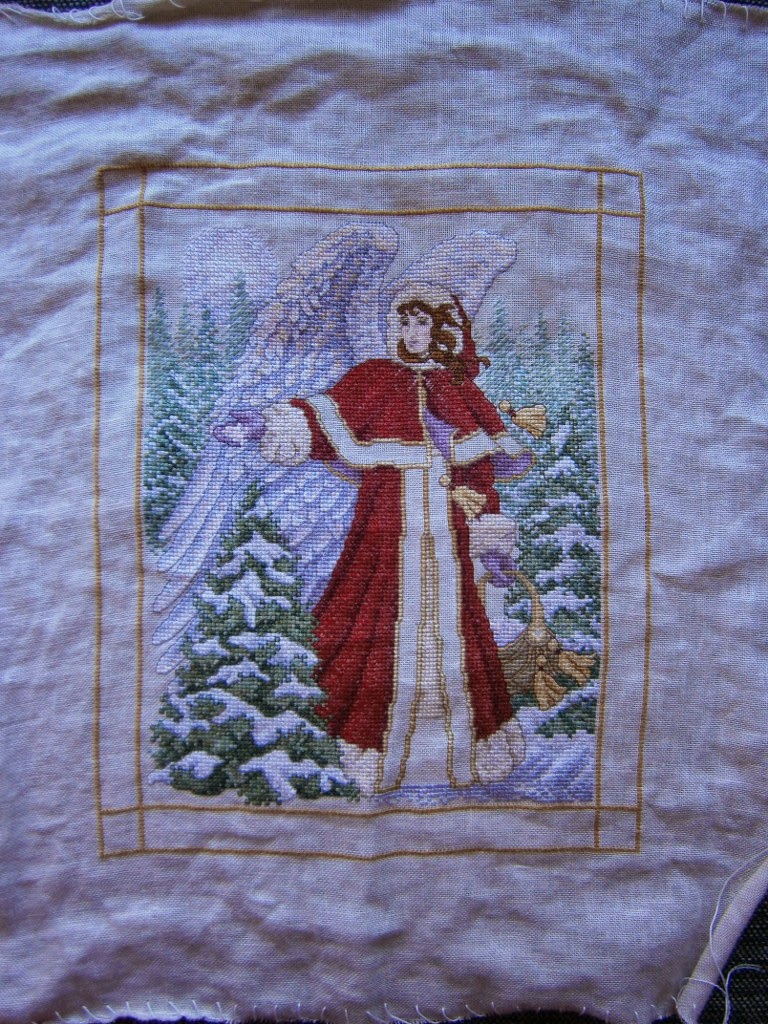 Now for my actual progress - there was much more of it then I expected! I had finished the remainder of the cross stitching by saturday evening, then I spent all sunday doing the backstitching on the wings. The tree in the foreground took me almost two days, since it wasn't always clear which lines should be stitched in the green of the tree and which in the grey of the snow, but I eventually figured it out and I think it looks okay now. The remainder of the regular backstitching went much more smootly, lots of straight lines and not as much as I had feared at all, and I finished the 'regular' backstitching tomorrow morning. I then decided to also put in the over one backstitching on her face, even though that's much further down the list of instructions, but it just felt strange to have her look at me without a real face. That part was done yesterday evening, and went by rather quickly as well, only that one of the colors used wasn't listed with the floss needed and I didn't have it, but it was only a few stitches and easy to substitute. 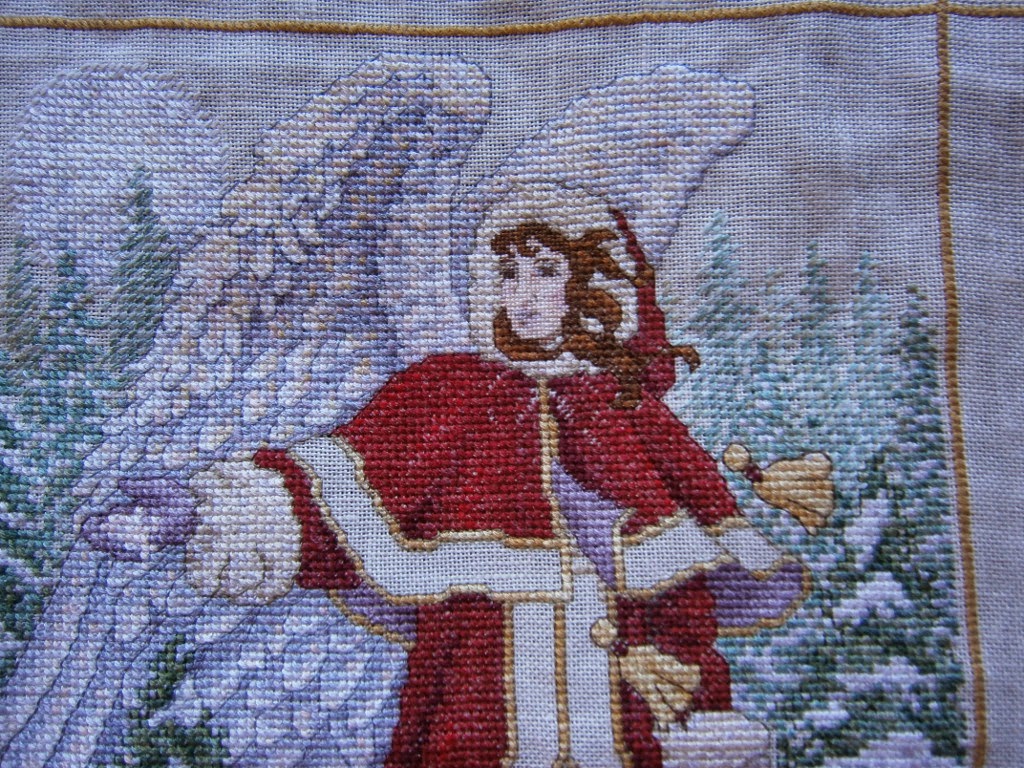 Here's another picture which is more of a closeup of the face area...I'm not 100% satisfied, but I can't frog on the over one two often or I will dissort all of the other stitches as well, so I think it will be okay like this. Now on to the 'special instructions', I will probably spend most of next week stitching snow flakes on the border.

It's only been a week of backstitching now, but I already really, really miss cross stitching...maybe I will take a short break soon to stitch up an ornament for an exchange I want to take part in.

As for other stuff, I didn't have time for much, but some watching had to happen or would never have made as much progress: And after The Walking Dead finally showed up on amazon prime, there was no way to keep Felix from watching that anyway. We already finished all of Season 1 (which is only six episodes), and E1-8 from S2. I don't think we'll watch much else before we caught up, this show is quite fascinating...
Apart from it, we've only watched a bit of The Nanny (S3, E1-4) and E1+2 of Once Upon A Time...Man. That's a rather old (1978) animated, educative show which is originally from France. Some of the facts in there have been proven wrong or incomplete by now, but I used to watch these as a child and I'm now doing it again mostly out of nostalgia. This first season deals with the history of humanity, there are quite a few more, but only the first three (Man, Space and Life) are on amazon prime so far.

So that's it for this week, I'm going back to working and stitching snow flakes now...see you!
Posted by Leonore Winterer at 14:09

She's gorgeous!!!!! And there is a lot of backstitching in those wings, looks like so much fun. I haven't actually tried overdyed floss yet, but it always looks pretty.
Have to catch up on the Walking Dead. I've watched till halfway through the third season and I think they are in five now. I enjoy it, but not in large doses.

Oh I love the detail the backstitching gives to the wings!

I almost started crying...this is beautiful and you stitched it so quickly. I'm afraid I have fallen very behind in all of my projects, but it's because...REASONS....please don't give up on the backstitching!

Beautiful. Congratulations on getting through all that backstitching. I love the effect, but hate doing it.

Take that break :-p. This is just fantastic. Was there any kind of special threads in this? Like a K braid? Just curious about the gold colors.

Your Angel is just gorgeous - can't wait to see the final finished made-up piece. Your Oma is one very lucky lady!

The wings were fun indeed, to see all those feathers 'come alive' :D

Only the first three seasons of TWD are on prime right now, so that is as far as we will get for the moment...I guess larger doses might get exhausting.

Nooo, don't cry, you can't see out of your eyes properly and that's totally bad for stitching! I'm sure you'll catch up on all of your projects eventually :)

Thanks! I usually feel the same, but this time it was suprisingly fun ^_^

I will...or did already, haha :D No special threads so far, all DMC. There will be a little blending filament to give the moon and the frost bits some extra sparkle though!

Thank you - I hope you soon will! Nad I really hope she will like it as well :)