Scary Stuff. Oh, and it's Halloween too!

Don't worry, there won't be really scary suff in here, I was just going for the joke...well, kinda, the week was pretty crazy again, but I'm getting used to it. After the weekend at Felix' parents (which was busy and great and left us pretty tired, who would have expected otherwise) we were planning on a nice quiet week to get further ahead in our work and setteling into the apartmaent, allas, it wasn't meant to be - apart from more furniture arriving on Tuesday (that much was planned) and having a bit of trouble putting everything together (that wasn't planned), we're having a bit of trouble with the craftsmen (that should have been done before we moved in, so...more then two weeks ago), my granddad is having health issues, work isn't going as plannend and and and...so much for nice and quiet! 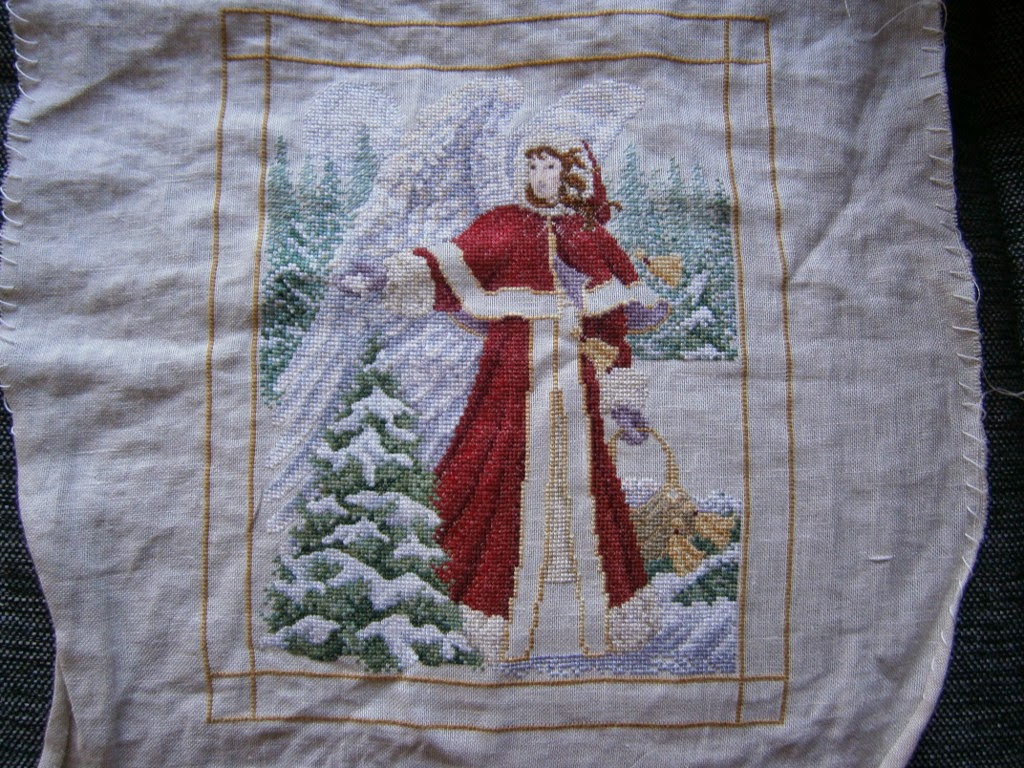 So to not further stretch my timetable, let me just give you a quick update here...Stitching has happend, not a whole lot, but at least rather steadyly; in fact, it feels much more effective since we have a couch and I have a stitchy corner on it with a daylight lamp! AoFs cloak was finished, as was her bag, so from here on, it's all tree and snow. Doesn't look like much, I might be able to finish that before next week, but after that comes the border, and the backstitching, and the beads...so I will be busy for a few more weeks at least. And all the while, she's just standing there, smiling and teasing!

I've also done some more knitting - only five more spikes on my shawl! I bought some more yarn for a new sweater, but I'm going to have to order another needle (or a shoter cable, to be exact) before I can really start on that. Some gaming has happend, mostly on my Vita, were I finished Mahjong Gold - I used to love those Mahjong Solitaire games, but got a serious over dose a few years back so I couldn't stand them anymore. Now that feeling has vanished, and I'm finally able to enjoy those games again ^_^

As for watching, some more Supernatural was the course of action, S2 E10-13, to be precise, and then yesterday we finished Season 2 of The Nanny, which which only had episodes 23 and 24 left. I hope we will be able to do some more over the weekend, but I think I'm giving up on making plans...

Posted by Leonore Winterer at 17:49

Your Angel is looking stunning - can't wait to see her finished.

It still blows my mind how fast you've stitched her up!

And I feel you on things not going as planned, I hope things go more smoothly for you in the future.

Thanks! She's on her way, I'll show my progress again later :)

I'm still feeling pretty slow compared to some other stitchers....but it really helped how focuse I was forced to be with AoF ^_^

I know more has happened but I still love reading your fun blogs! I hope your craftsmen get done with their work so you can live in peace :D