So...I actually meant to have this up on Saturday morning, but then I overslept and my dad got here before I could post; we spent the day with him as well as Sunday morning and by Sunday noon I jst thought I could make this a proper post-weekend post instead. It might even have been IHSW, the judges are still not sure whether it should have been last or next weekend. Long storey short, life happend and got in the way and so my post comes now.

So as predicted, I mostly stitched Snowflakes on Angel of Frost. I got them all done in four days, and they turned out really pretty (if I may say so!). Next up was the diamon lattice which is made with wrapped backstitch, and I have to say I'm not to fond of that...working with six strands is not so much fun, especially the beginning and end of a thread, and it just looked so...bulky. I had half a mind to rip it out again, maye try three strands or just the backstitching instead, but luckyly I decided to put the lazy Daisies in in the section I had been working on, and with them I can now see how rich this border is actually going to be, especially when the beads will be added (lots and lots of beads, to be precise), and I think the wrapped backstitch will look good after all, so I will continue doing it - if I can find another skein of Ecru, I know I have one or two in my stash, the satin stitch and the wrapped backstitch just ate through it really quickly. By the way, that makes three stitches I'd never done before! 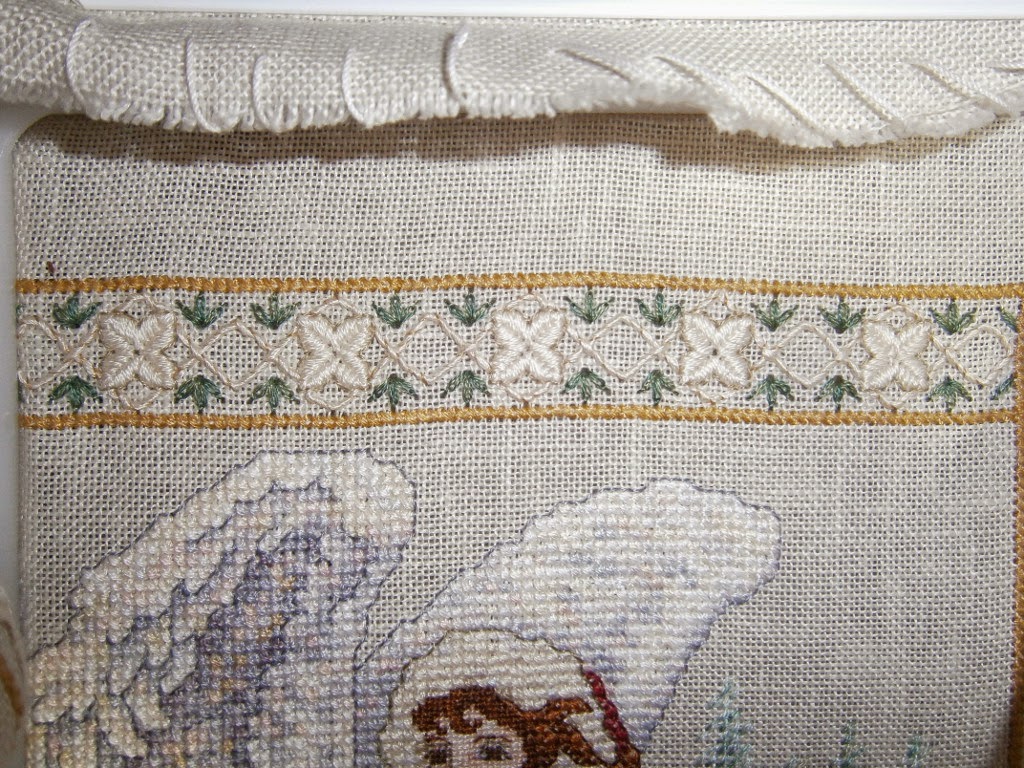 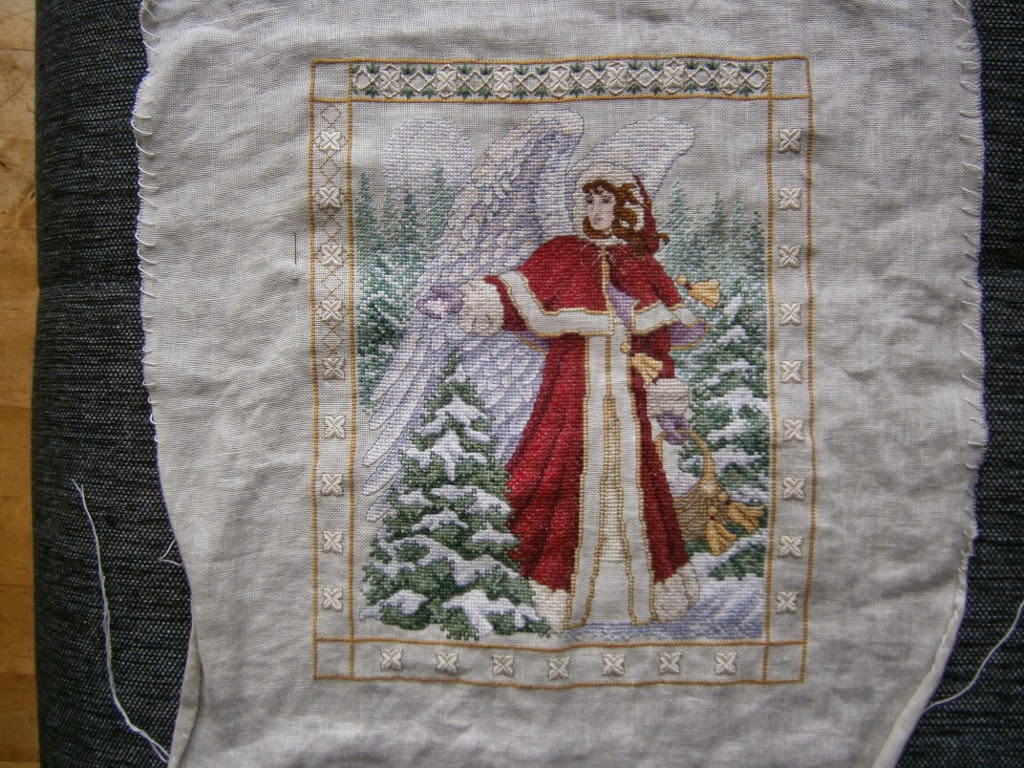 With all this wrapping or no wrapping, I got a little frustrated with AoF this week, so I decided to actually start on this ornament I have been talking about. It took me a while to find a pattern I like (and actually have the supplies for), but I finally found something nice and I already finished most of the stitching - I hope I can take it to my grandparents later this week to get my sewing stuff and finish it. As it's for a secret exchange, I won't share my progress with you just now, but I can show you the floss toss I did before starting, and share a few hints: White and red are the colors used most, and it's winter-y, but not neccessarily christmas-y. 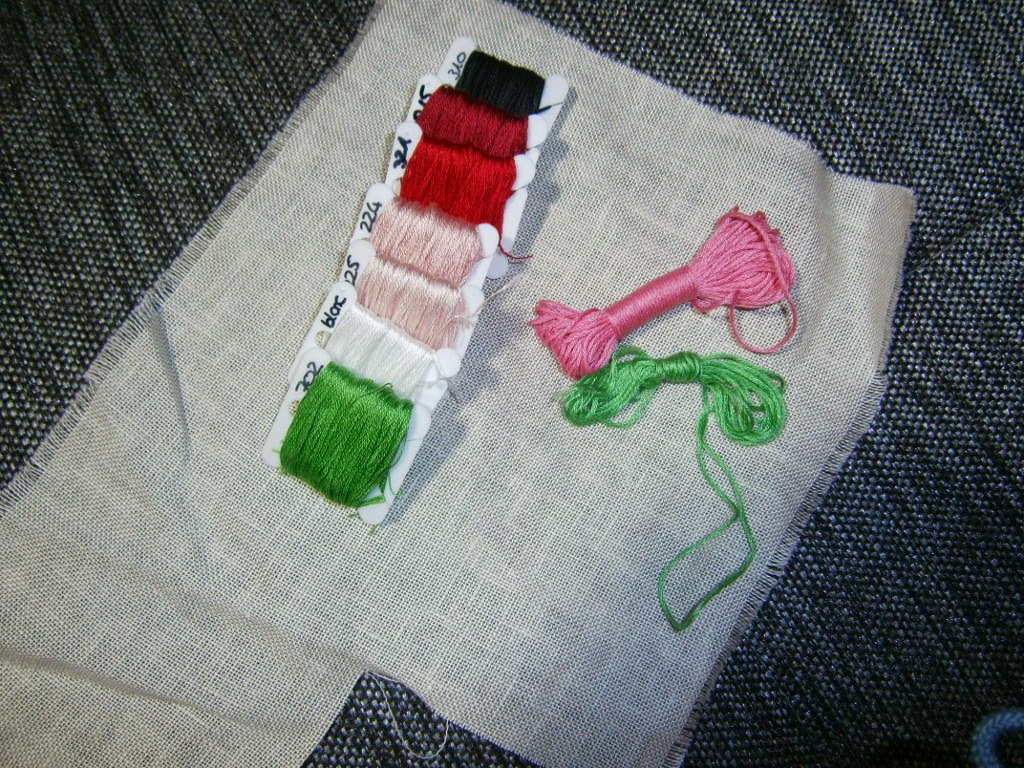 Other than my stitching progress, most of my time focused on writing my thesis this week. I already got 14 pages down, so I am optimistic to finish it in time - I just miss doing other stuff so much! You wouldn't believe it, because I actually got a bit of stuff done this week, but apart from our usually hour-or-two of relaxing on the couch and watching stuff in the evening, it was really just things that were almst done already: I finished a little game on my PS Vita called Doki Doki Universe, where you play as a robot looking for the girl who left him on a lonely rock in space and at the same time learning but being human is about, because otherwise he'll be trashed by the company that made him. He then travels from planet to planet, looking for the girl and helping people by bringing them stuff. Fun little game, but it did get a bit repetetiv in the end.
I also finished my most current book, which was 'The Memoires of Sherlock Holmes'. I really like this stories, and the end was pretty sad - if I didn't have the next volume titled 'The Return of Sherlock Holmes' on my kindle already, I might have cried a little; but as things are I'm just really looking forward to read that.

As for watching, I realized that last week, I totally forgot about two movies we watched: The Hangover, which I had actually never seen before (shame on me) and really enjoyed, even it the homour was a bit...crude? for my taste at bits; and also Babylon A.D., which I enjoyed, but not really understood.

This week, there was some more of The Walking Dead, we finished S2 (E9-13) and started on S3 (E1+2). We already watched quite a bit of The Nanny (S3, E5-18) because it makes for a great, short working-break and I don't want to watch TWD right before bed. Then I also watched E3 of Once Upon A Time...Man, and when my dad was here we saw Wasabi, a creat French/Japanese production starrind dad's favourite Jean Reno, and a few short episodes of Shaun the Sheep (S1 E1-3), a stop/motion animation by the guys who also did Wallace & Grommit. Sounds like a lot, but didn't really feel like it...so now I'm back to writing before I'll hopefulyl get to watch another merciful episode of something, then fall into bed :D
Posted by Leonore Winterer at 20:53

The Angel is beautiful. Can't wait to see the "wintery-christmassy" stitch you'll be working on. :-)

Angel is gorgeous, The Chrismassy thing has lovely colours so it to shall be gorgeous.
I don't understand The Hangover, I usually hate shows like that but it is one of my favorites. Maybe it's because the men acted stupid because they were drugged and not because they are just stupid, like most comedys.

I love Jean Reno, I'll have to hunt that movie down and watch it. AoF is really, really, really beautiful and the border is so incredible. I applaud your staying with the initial wrap....which could easily be replaced with couching using the memory floss...but that is for later perhaps?

Love that border and you're doing a great job with all those new stitches.

Thanks! I think I'll show it today after all...

Thanks! I liked the colors as well, AoF is so...not dark, but not bright either. Is there a word for that?
I agree about the Hangover. It's level of homour I don't usually enjoy, but still really funny.

Please do that, it's awesome!
I think memory floss would look to...modern? for this kind of project, but I really want to try working with that some day :)

Thank you :) Got a lot of practice in the meantime!