While I have to admit that I could have finished this much earlier if only I didn't dislike the finishing part of crochet projects that much, I am still proud to present to you the second kindle cover I made, this time for Felix. We initially agreed on making the whole thing in black and red stripes and so I chose a pattern that works really well with two different colors, but then his mother saw it and was like 'He's almost a man grown he can't have something with that bright colors' and suddenly he only wanted a little red and I had o do the pattern black on black, which wasn't easy to do. I mostly worked on it in math exercise (where everyone met to ask the teaching assistants questions) because I had a seat near the window and some nice sunlight in my back, just about the only light that makes black on black easy to see. When doing the finishing part, I got my revenge and added a little more red; the button itself is black as well, also the shine makes it look much lighter in the picture. 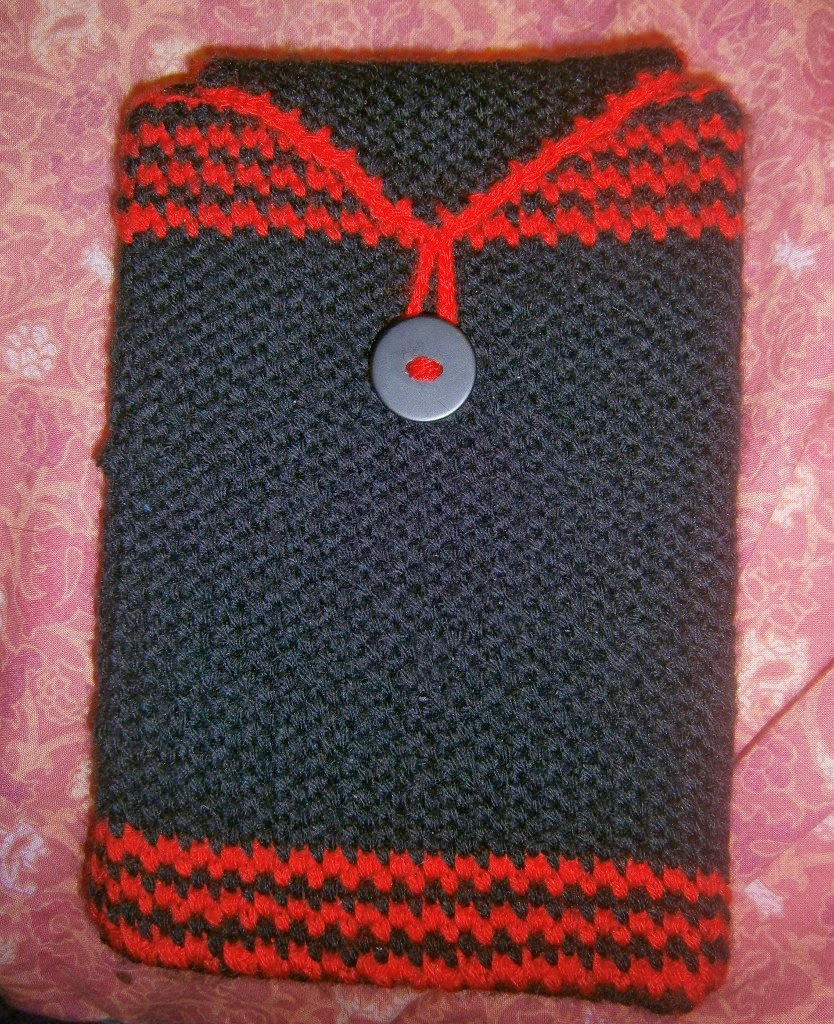 I'm not quite done yet with kindle covers, because Felix' mum now wants one as well - but before that, there is a smartphone cover to finish, and than some well deserved play time with my pretty new yarn!

I also realized that my last posts sounded a little like there is only learning and a little stitching going on in my life right now, but rest assured that I DO force Felix to take a break every once in a while as well. We even got to see some more of our movie list - so here's what we watches apart from some more NCIS:
I also started rewatching 'The Nanny' because I never really saw all the episodes in the right order, only bits and bites here and there, and some light entertainment is never wrong after all :)
Posted by Leonore Winterer at 13:58

I love your Kindle cover! I'm glad you put the red in anyway, it would have been a bit boring without it :D I take it you watched the dubbed version of Snow White and the Huntsman? Wish you could have had a subtitled one instead as that is generally better because you get to hear how it is actually said. I've never seen Hachi, so I'll have to put that on my list!

Going to admit that I only watched Snow White and the Huntsman because of 'Thor' and I don't like Kristen either.

I haven't seen any of these ones. Though a friend that know my tastes said I'd like Snow White despite Kristen Stewart. Though if you go back to her pre-Twilight stuff, most of it isn't bad. The Kindle covers are awesome, makes me wish I had one, and a Kindle to go with it.

Yeah, it was a dubbed version, amazon instant video has very little OVs, only a few shows, no movies. But I also have to admit that at the end of the day it's just easier to watch something in your own language (subtitles don't work if you want to stitch, right?) and I don't think it would have made much of a difference anyway with a movie like that.

Haha, Thor is hot, I won't disagree with that.

Oh, I didn't even knew she'd done a lot of stuff before Twilight, maybe I'll have to check it out.

Let's make a deal, if ever you get yourself a kindle, I'll provide a cover for it :D