So March is over (where did the time go?), and I have some progress to show. And since Felix finally had his math exam yesterday (and after all his panic making, it went pretty well...no comment on that) I'm all stress-free now and have the time to a) stitch and b) write about it ^_^

During the last few weeks, I kind of neglected my beautiful, beautiful Peacock Tapestry, so I decided to give pretty bird some extra love and care last week, which worked out quite wonderfully - I actually finished another section of the border on sunday. I switched to the right border now instead of doing the lower one first, it just felt better to do it this way. So have another closeup shot, just because I can~ 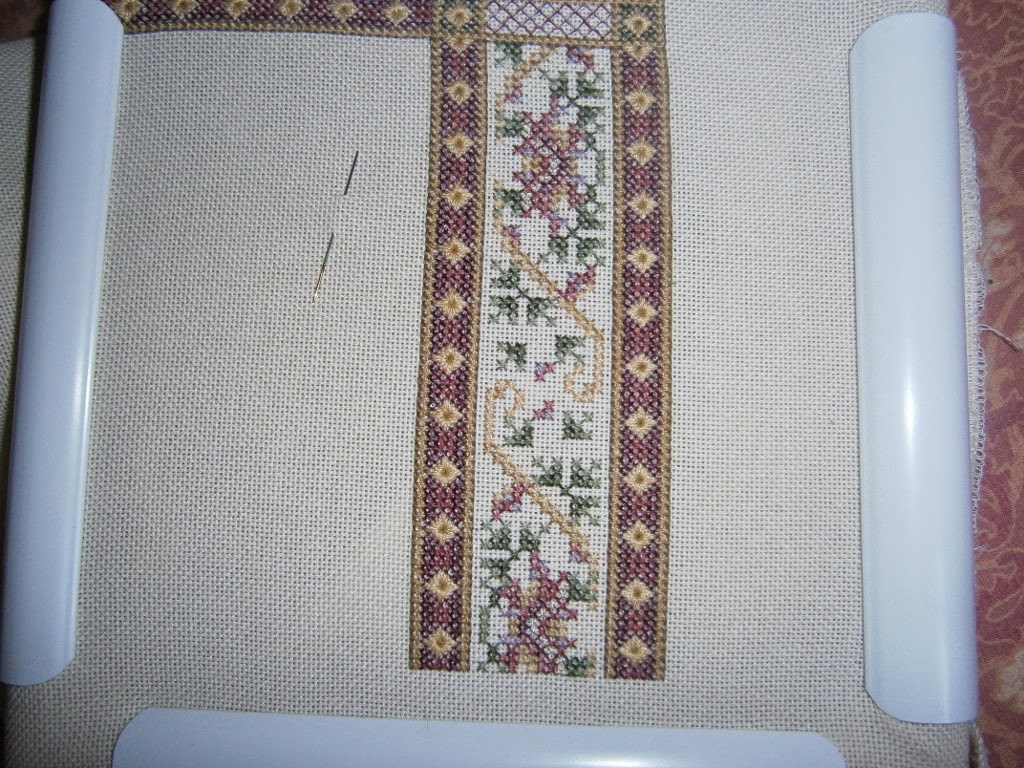 I also spent some more time with Lady & Tramp - this pattern is amazing, it's huge, but then everytime I work on it it seems to go just a lot faster than I thought it would, maybe because most of the time I can stitch a lot without ever changing the color, almost no confetti thus far - so I've done a good part of a branch and a roof, and started a tree (most of the green was done yesterday while lazyly enjoying 'no exam'-time with Felix). Now the plan is to first finish the tree, then the roof, then to slowly work my way down the house. 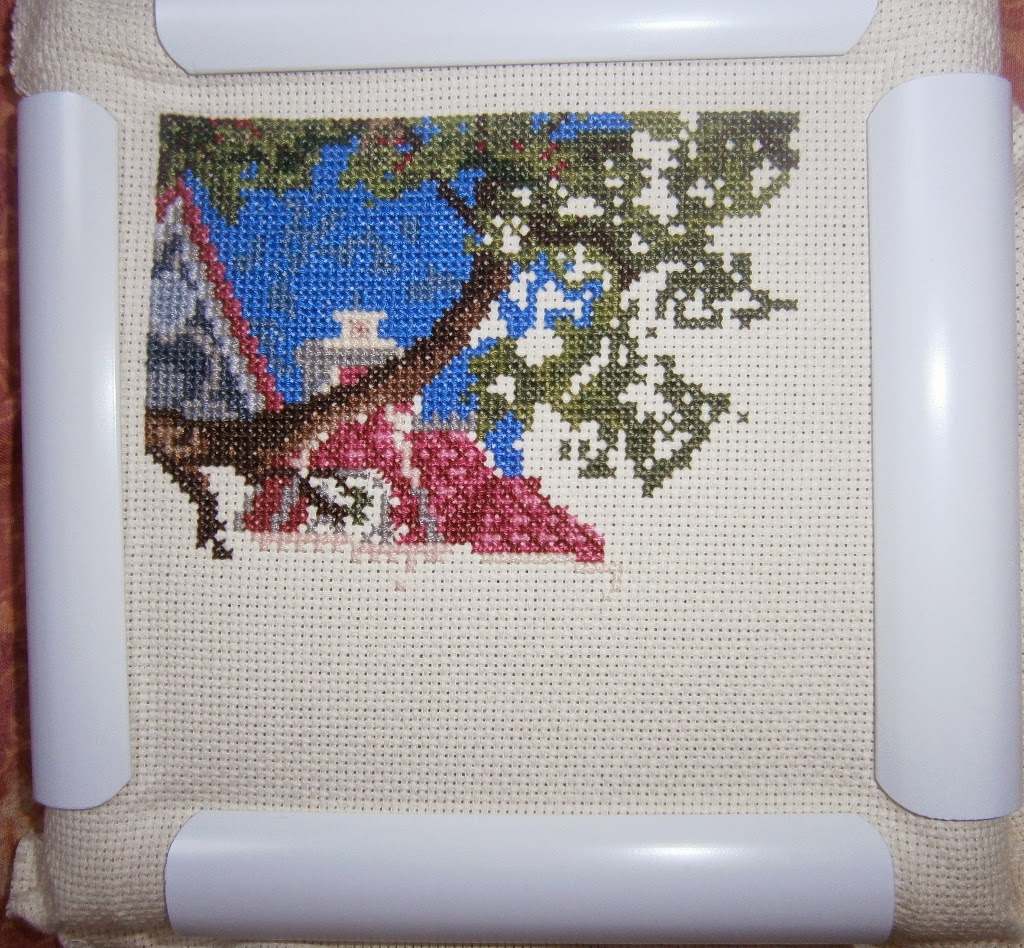 Last of, I also want to show you the progress I made on Tully since the last time you saw it - it's not much, but I just couldn't resist doing a few stitches here and there. There probably will be more progress on this in April as I'll spend two weekends and a few extra days at Felix' parents, and bookmarks are for on the road. 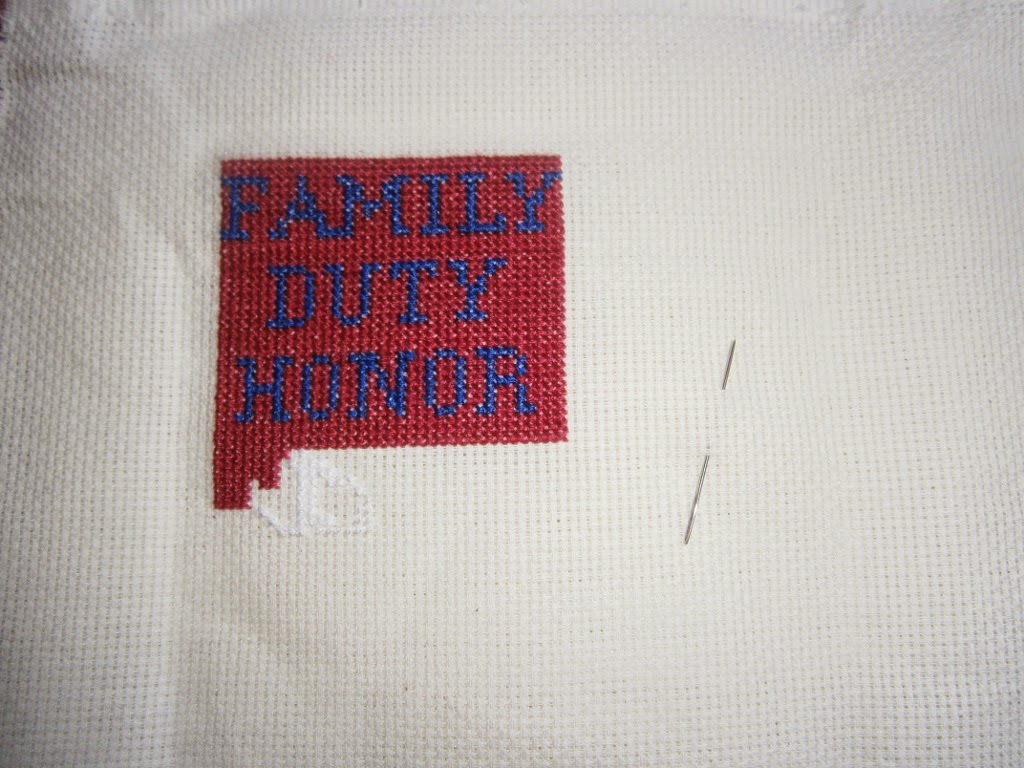 So that's it about stitching for the time being. We spend a lot of time in front of the TV yesterday, finishing up NCIS season 9 (evil big cliffhanger in the very last episode) and watching Total Recall - now that is a movie I enjoyed, although maybe, it takes itself too seriously. That's what I like about Marvel movies, they are always so full of jokes and puns and stuff. Anyways, I'm told Total Recall is actually a remake of a Schwarzenegger-movie from some 20 years ago, but I'm not a big fan of Arnie (Terminator was okay, but apart from that...) though I guess I can safely be content with having seen the new version ^_^

Posted by Leonore Winterer at 10:12

I'm a fan of the old Total Recall so I've been a bit iffy about seeing the remake, but If I find it I'll give it a try. PT is looking as gorgeous as ever, and Carla is talking about joining us on the bookmarks, which I guess makes them the official back up piece of TYOTW

You are kicking butt on your projects! I was watching Game of Thrones the other day and FINALLY could resist no longer....I too MUST make the book marks. Nancy's turned out so beautifully and yours will be beautiful, so now I need mine to be beautiful :D

Lady and the Tramp is really coming along! But I'm still so very excited to see the progress on PT. You and Nancy are really getting some major work done on your TW patterns. :D