Well...the people chose traditional samplers this month for Jo's wonderful all purpose SAL, but me myself, I don't chose them very often, so I don't have a lot to show this time. In fact, not counting the band samplers (and I don't think those are what the 'traditional' theme was calling for) I only found one. To make up for it, this one is *very* traditional, though - it's a sort of reproduction sampler Magical charted after an embroidered piece of cloth that has been estimated to be between 600 and 800 years old! 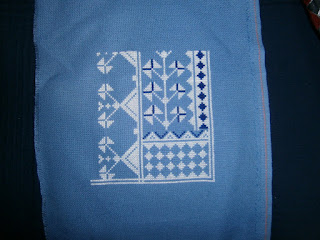 It's not that I don't like traditional samplers, there just never was one that screamed 'stitch me' loud enough to actually get through to me. There are a couple I like, though, and I really want to stitch a quaker design one day!

Posted by Leonore Winterer at 21:25

Blue and white - my favorite combination!

Thanks for taking part in The People's Choice this month. That is certainly a very old and traditional sampler!
I was unsure about band samplers, the kind Just Nan designs are not really what I would call "traditional" or "modern" either.

That is very pretty. I think you can define traditional. To me, the current trend in "traditional" samplers is very Great Britian-centric and I'd love to see more countries represented.

This is pretty, Leonore! I am not a sampler stitcher ordinarily, but have done a few--although not traditional ones by any means. I guess I am just too hooked on the satisfaction that I get from stitching and finishing smalls :)