I missed posting my pies in March, and I know I'm running a little late for April again, but if I want to try and get caught up, I have to post them some time! So here we go.

In March, I managed a decent amount of crafting - a little over 80 hours - but, due to the Mischevious March starting madness, things were spaced out between a lot of different projects! I think you've seen all of them, though. 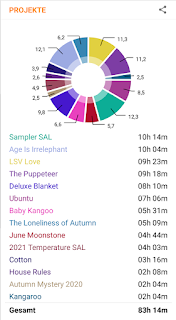 In terms of crafts, most of it was stitching, but also a fair amount of crochet as well as some finishing - mostly on those crochet projects. Sewing together the two kangaroos should account for most of the time! 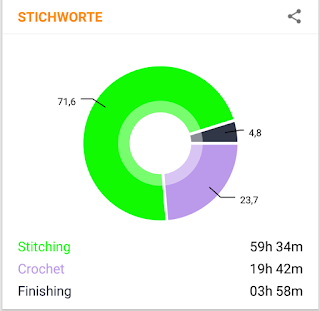 I had two weeks off work in April, and it shows in my stitching too. I had quite a good run, at over 90 hours! And more focused, too. I managed a lot of stitching on Age is Irrelephant, and also on TLOA, which required some catching up because I didn't quite manage my stitches in March. I think you haven't seen the final picture on the Fluffy Scarf so far, but that will come with GG (tomorrow?) and the Hufflepuff Socks and Nan's Garden will hopefully get their own posts, soon! 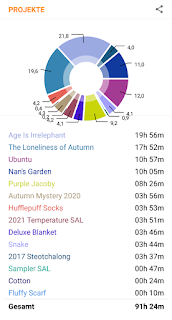 You can see that I did some knitting, which was mostly the wristwarmers I made for grandma, and those new socks. Lots of exciting projects going on here! And to give you a little teaser - I think May is going to turn out a lot more colourful than I had planned, as well... 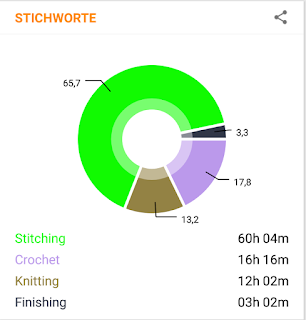 Posted by Leonore Winterer at 22:58

WOW! I love looking at the crafting/stitching charts. Amazing how organized you are.

Lovely Pies, it seems you were quite productive. Maybe you should add a segment for blogging LOL