Work is still crazy, so I am still wildly behind on all my checkins - I'm getting there, though. Today, we're looking at my stitchy pies for November. Sadly, there were some technical difficulties, as for some reason TimeSheet won't let me export the graphs right now - if the problem persists, I'll have to look into it more closely when I have time. IF I have time ;)
So for today, we'll have to make do with crappy smartphone screenshots. Here is my pie for November, and as you can (barely) see at the bottom, despite being home sick for two days my stitching time has taken a light dip - a sign of crazy work time for sure! 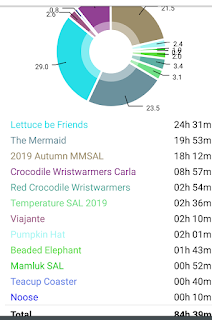 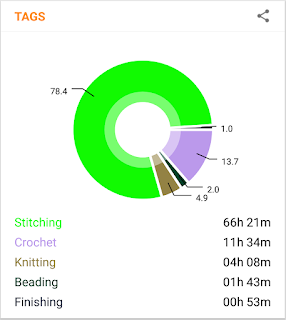 I also figured out how to use tags this month, so I can now show you how my crafting time is distributed between my several vices - most is stitching, but I also did a fair bit of crochet this month.

Now I think all my November projects either have been posted, will be posted soon, or haven't seen a lot of progress since the last time, but one, and that is the Autumn MMSAL, which is all finished! Not during the weekend it was actually taking place, for after several massive frogging attacks (I think I need a frogging-tag! Why didn't I think of that earlier?) I decided to take things more slowly, and spread the parts out over a week or so. I also stitched the backside which was released all in one go: 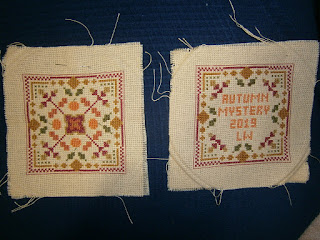 Just for funsies, I also took a picture of my backs. That's the difference between stitching the single parts, sometimes just adding one or two stitches of a colour, or stitching it all in one go! 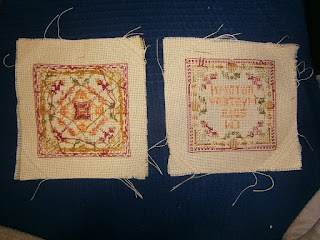 For December, I'm only at 23 hours so far...but I sure hope that after Christmas I'll have some time to make up for that!

it's still a nice number of hours crafting! Yes, stitching all in one go is much more efficient, both in the read usage and in how it looks - but then it wouldn't be a mystery ;-)

That's a very pretty design. Congrats on finishing it!
You're braver than me; I'd never show the back of my work! It;s not untidy as such but I'm sure would get a few tuts from the more professional stitchers! :)

Nice work on the pies, we definitely don't need a section for frogging!
The Autumn Squares look great, will you be biscornu-ing it soon?

It's a great amount of stitching, especially this time of year! x