And as promised, it's Gifted Gorgeousness time, the wonderful SAL held by our wonderful hostess Jo! This SAL is super easy for me at the moment, as I seem to work on hardly anything that is NOT a gift. Also, I'm not going to annoy you with a hundred pictures from the longest Day SAL yet again, but only show what I've worked on since then :)

As you might have expected, I've been working on 99...I didn't quite make it to a full finish yet, but I only have a little over four bottles left to go, so I should finally get there this week! 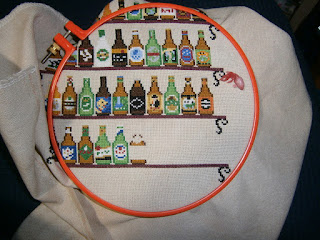 I've also pulled out an older WIP, this fluffy cat a friend asked me to knit for her. I recently realised that I hadn't worked on it in over a year, so I decided to settle down and really get her done now. I already finished the head and body and most of her face - I have two ears left to knit, an arm to attach, and the second arm, two legs, and tail left to knit, but it's going well. 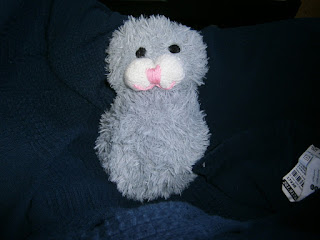 Then I had a small new start - a little freebie by Maria Brovko and my contribution to a charity quilt project. I have until mid August to complete this, but the sooner the better :) The little crogy is almost ready for back stitching now. 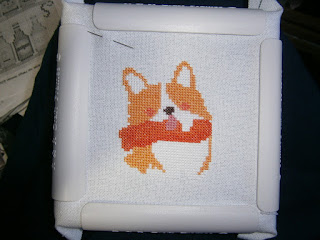 And last but not least, I've been working a little bit on The Mermaid and added a bit of the next blue. This really needs a lot of more attention...and I hope she will get just that once 99 is done. 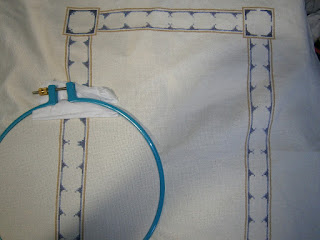 Posted by Leonore Winterer at 19:34

So close on the 99 bottles. Great work on all of them!

Thanks for taking part in GG this month with your wonderful pieces! I am sure we will be Happy Dancing for 99 very soon.
Not sure about the crogy, is he a corgi? The Queen's favourite dog!

So close to finishing those bottles, that's great!
Awe, kitty is adorable, I can't wait to see her finished.
That Corgi is going to be so sweet and bring on the mermaid!

Haha the cat looks like an adorable fluffy peanut at the moment! Novelty yarns are always so interesting to play with.

I really like Maria Brovko's designs and am looking forward to seeing this one stitched up. I wonder how 99 Bottles is coming along - is it finished yet? There's nothing like finishing a big project in my opinion!

You have been really busy - and you are so quick at your stitching! Your kitty is so fluffy and cute! Good luck with your final 4 bottles x

I bet you'll have your beer bottles all finished this weekend! Can't wait to see it :)

Yay, almost done with the 99 bottles. Haha, I like how you said you don't want to annoy us with hundreds of pictures and I'm like "I WANT MOOREE" lol.

You've been busy with all your various projects, great progress!