It's been a while since I posted last, and a lot has happend - a vacation to Ireland (pictures incoming...eventually), a few lazy days at home, lots of crafting and a few check ins I need to catch up on...everything will be talked about eventually, but since I have an upcoming trip to Italy on Sunday, some might happen after that. For now, though, I have a Gifted Gorgeousness to log into, and that's what I'll do!

First thing to mention is a Needle Minder Exchange, hosted by the lovely Ingrid from Mii Stitch! The idea was to send a needle minder, small stitched item and a skein of DMC to a randomly drawn receipent, and also receive the same. I received my parcel from the wonderful Lorynn way ahead of time: A gorgeous little mandala, a cute turtle, and not one but two skeins of DMC Colour Variations! In her letter she wrote that she's going to stitch the mandala again so she can tell everyone it has a twin in Germany, isn't that awesome? She herself is located in Florida, so I really hope she's alright... 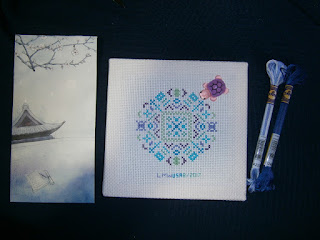 Of course I also sent something out, and since my recipient has posted it already, I can now also share with you - it has been hard not to because for some reason I am really proud of it! I bought this lovely little koi needleminder from Jody at Unconventional XStitch (you might have seen the red one I've been using on Snowwhite) and that finally gave my a reason to stitch the fishy frame pattern Magical shared a while ago. I went nuts with some Hand Dyeds I had in Store - Jodyri's Winter Solice and Fiberlicious Rose Petals, both of which are insanely pretty - and also substituted the french knot for some tiny beads Carla sent me a while back. Initially, I only planned to stitch the frame, adding the phrase came natural and now it will look nice with the needle minder removed too :) 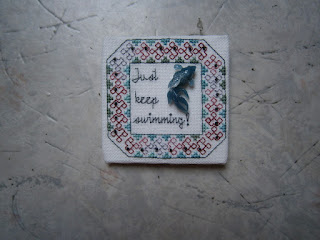 I also had to knew starts that I can't show (the usual, because they are gifts for people how might look at my blog), but I also had a new start that I can share, and I took this one with my on vacation. Some of you might have seen it before - it's Inkcircles's 99, with 99 different bottles of beer. Felix' dad is turning 60 next year, and this is going to be  our gift for him. I did not quite meet my goal of stitching one bottle everyday of the vacation, but I did get close! 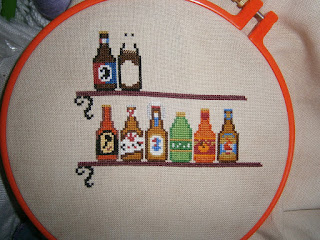 So that's my GG progress for now...I'll be back with more stitching and other stuff soon!

Posted by Leonore Winterer at 12:16

Nice exchange! I look forward to your progress on the beer bottles!

Ireland and now Italy? You are definitely getting around. Safe travels. Very pretty package you received. So sweet to think of twin mandalas. Love the package you put together too - really pretty colors. I stitched 99 for my son and have a shelf and one or two bottles finished on the one I'm doing for my nephew (he'll probably be 60 before he gets it).

Thanks for taking part in GG this month, don't forget to link up!
I love the koi needleminder and little pool you stitched for him, such a clever idea.
Great work on 99 too, have you been beer tasting as you go?

Lovely gifts Leonore. 99 bottles looks great. I have had that one kitted it for a few years.

Lovely exchanges. I love the idea of a mandala twin! x

Both the exchange gift you got and the one you sent out look amazing =) Your 99 bottles look very promising, I'm sure it will make a fantastic gift =)

What a great exchange, I so like this little turtle!
Thanks for taking part in the swap :)
The 99 bottles look like a fun project to be working on.

What a great exchange! It's been fun. My package went to Lorynn butvi haven't heard that it's been received - I hope she is OK.

I'm glad you liked it all! I will definitely be stitching it again soon!

What a great exchange for all!
Did you try a beer every day on holiday?! It looks great so far.