Two SALs and a finish

While I was still a little busy last week (not gaming...definitely not gaming...maybe), I still have some progress to show. First up is the next part of the Lizzie Stitching Wallet SAL - I finished the backstitching and French knots, but I'm still missing the beads (as well as supplies for the third part), so I'll have to pause a little until everything arrives. I still really enjoy this, the colours are so nice and soft and the design is so delicate :) 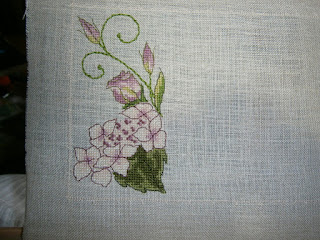 And since I don't have enough on my plate yet, I started another weekly SAL, the Steotchalong by Steotch - they've done some fun and geeky patterns in the last years, but I have no idea what it will be this time, which is half the fun! It's pay what you want and doesn't need a lot in term of supplies, though, and the parts are really small, so it's worth the 'risk' for me. Here is part 1 all stitched up, I really like the colours used :) 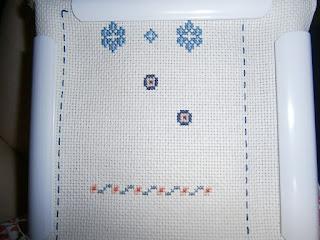 Over the last week (and then some on the weekend) I finished my baby blanket I worked on in Cyprus. It was just a few more rows, but at this stage, one row took me almost an hour! I got it all nice and blocked to, so it's now nearly quadratic in shape and measures about 90x90cm (or 36", if I'm not mistaken). 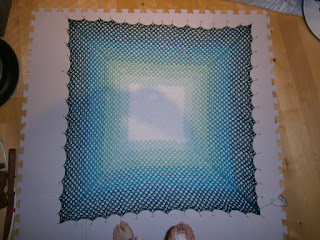 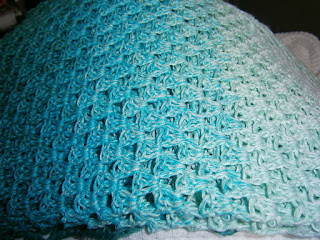 I've also worked on my second security blanket bunny - the blanket part has been finished for a while, but I finished the head last week and the ears over the weekend. Now I only need the arms before I can sew everything together. 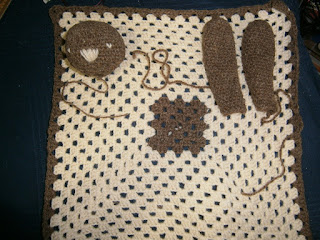 This coming weekend, we'll be at Felix' parents, and mostly outside too - I still hope to make some decent crafting progress to show afterwards!

Posted by Leonore Winterer at 15:02

You have been busy! Those blankets are gorgeous and I love the look of your LK SAL. Looking forward to seeing more of the new SAL too!

The stitching wallet is so pretty and delicate.
The new Mystery looks intriguing, not sure what it is going to be yet!

The wallet stitchery is gorgeous! Nice work on all your projects.

The wallet stitching looks so refine, very very pretty!!
Love your work on the blankets too.

Lovely work on your stitching =) I can't wait to see the bunny blanket finished, it will be so cute =)

You've been really busy! I love the colours of the Cyprus baby quilt, and look forward to seeing more of the mystery SAL x