So after much lazyness (last weekend was a bit busy, so was the week before it), I'm finally getting around to  a 'regular' blog post which also doubles as my entry to Gifted Gorgeousness. I've worked on three pieces and coincidentally, those fit perfect the three categories of GG :)

First, the shoehorn: I've stitched another one of the free ornament patterns that Magical has done last year. This oneis Peridot, the birthstone for August, and it had a TON of backstitching - they all do, but this one in particular - but it turned out oh so pretty! 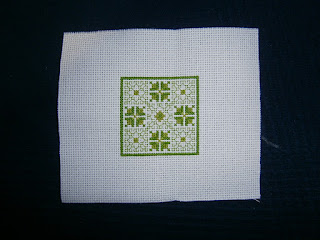 Only four to go for the first batch now, until I can think of what I want to do with the duplicates (there are more than one for some months) - I have several ideas but not yet decided.

Next, things that are going to be gifts. No stitching here, but I did a bit of knitting on my first sock; finished the heel and did a nice bit of the foot already. Actually I've been a bit lazy with knitting lately, I need to get that up and hopefully finish the first one this weekend. 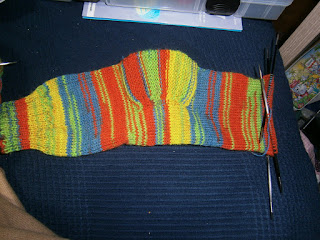 And lastly, stitching on stuff that was gifted to me - when we went to Felix' parents for a funeral last weekend, I took Lady & the Tramp fom the Disney Dreams collection with me. I got it all neeatly packed in a bag, so it's kind of my go to piece when traveling. I made some progress over the weekend which made me realized that I could make some *serious* progress if I was to focus on this for a few weeks, and since I don't have any finishing obligations right now, I just kept at it once we were home. Didn't have a lot of time again this week, but it's still coming along nicely: 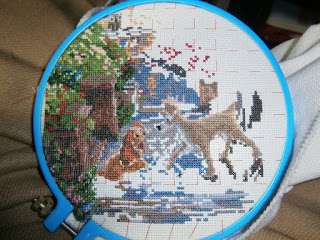 I'm pretty busy at the moment, but there are a few big chunks to fill in so I'm still making progress :)

And that's it for today - I hope I can make some good progress over the weekend and show you the results soon!

Thanks for taking part in GG this month. Great use of all the categories too!
It's good to have a travelling project too.

Very pretty. I would have had a fit with all the backstitching! So not my favorite stitch. Knit socks!! That is the apex of knitting for me, I just want to get good enough that I can knit all the socks I have planned!! I like the way you gridded Lady and the Tramp - I'm still looking for the perfect way - my first try was too labor intensive and rather hard to pull out.

Nice progress Leonore. I love Lady and the Tramp.

Lovely Gifted Gorgeousness! I really like your idea of focussing on one project and I'm glad you've got stuck into it as it's so pretty!

Lots of pretties :) I love the color of the socks it's very fun