In an attempt to updates this blog a bit more frequently, I tried to get a lot of stitching in last weekend so I could have something to show, and here we go :) This is the time of the month were I would normaly write my SFS update, but since I'm no longer part of that, I won't - still feels a bit strange, but honestly, I went a bit wild with buying stash now that I'm free so I'm quite happy I don't have to confess everything ;) I'll probably show most of the things in later posts, though.

So, progress - was stitches busyly away on Dark Force, and finally finished the last column of the first row. 24.000 stitches, a bit more than 1/6th of the whole design, is done. I now reached my goal for the year on this, so I'm putting it away for a bit, but I'm sure I'll get back into it sooner rather than later to see if the remainder turns out just as pretty as this first row :) 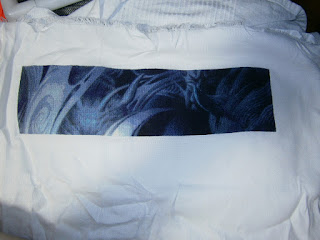 The rest of the weekend I spent working on My Day Off, filling in that bit of wall on the very left, then doing the outlines for the sandy part underneath, which I now need to fill in as well :) 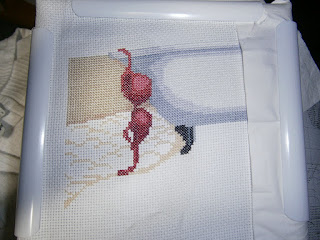 I'm now planning to work more on My Day Off untill I get tired of the colour blocks, then switch to one of my other projects for a while :)

On friday night, Felix and I watched Jupiter Ascending. We've hear plenty of bad things bout this movie, but it's really not THAT bad....but it isn't really good either, and the strange bit is that I can't say why. There are plenty of stunning visualy, the plot is interesting and original and seems to have so much potential, but still...we didn't really get into it. Something was off, can't put my finger on it.
We also watched a bit more of Case Closed (E28-32), and I watched This is me, a short amazon prime-produced docu on trans lifestyle and mosty problems - a 'raising awareness' kind of thing. Still pretty interesting :)
Eingestellt von Leonore Winterer um 21:04

Never heard of Jupiter Ascending. I'll have to look for it when it shows up on Netflix.

Congrats on reaching your stitching goal! It's looking wonderful. Beautiful progress on the other piece, too :-)

Dark Force looks amazing! Hope you don't put it away for too long.

Awesome progress on both pieces Leonore.

Well done on the row finish.
Is that a discarded bra in My Day Off? Or am I imagine things?

Congratulations on the row finish. I am only dreaming of that on my large piece. The baby jacket is very cute and love the little ones name.

Do that, and when you don't expect too much, you're probably in for a decent movie :)

Thank you! It feels *really* good to have such a massive point cleared from my To do list already ^_^

Thank you! Time after time again it's a stunning sight to take it out of the frame :D

Thanks! It might be a few months before I pick it up again since I have two deadlined projects to finish first, but I might sneak in a few stitches here and there, now that I don't have any pressure to get anywhere...

Thanks! You're not imagining things at all, it is a discarded bra and there are some discarded panties in it as well! The full picture is a naked lady sitting in a bathtube (though you can only see her head, legs, and one arm), her underwear lazyly cast off. You can actually see it a few posts back :)

Thank you! The way you are working on your large piece, you'll probably take a while longer, but then finish several rows at once when you get there ^_^

Great progress and thanks for the movie and show tips!

Dark force looks so good! you are doing a grand job of sticking with it and deserve a little break from doing it. the bath is also looking good and such a great choice of pattern for her!

Thanks and you're welcome! :D

Thanks! I still need to find my flow on how to deal with those big projects in the long term, but I'm optimistic that I will find it eventually.

DF is so beautiful! This is what I was thinking for the Lion King SAL...one row or column or what have you per week which leaves plenty of time for other things to get sidetracked on :D