Phew, I almost missed that one again...time is flying by soooo fast, where did it go now? Anyways, I'm a little stressed out today because I had a meeting at university that was somewhat exhausting, and there will be even more meetings tomorrow so I need to get this post up today - pray excuse me if I can't write to my usual standards now, haha :D

So, Stitch from Stash...oh my, I'm quite awful at that, I just can't get a month without new starts and new stash, it seems. I do manage to stay quite under the budget yet, so maybe there is still hope for me, or maybe I'll be coming out of this as an awesome sales hunter, which wouldn't be too bad either. Anyways, my sins for this month are the pattern for Spring Bunnies, which I got off Etsy at $4.00, and a little order I placed at Jodyri Designs for some hand dyed fabric and more of her adorable floss - I really loved working with the colors I got last time, and she has so many more awesome things. My total comes to £7.72 (~$12.97) for 13x9" of sparkly fabric and three skeins of floss. I actually got a £3.50 discount because my last order was delayed so much, but she said that's supposed to be free shipping so I wont count that for SFS after all.
Appart from that I finally ordered some supplies (pattern, floss and waste canvas) for two of these secret projects I keep telling you about, but both are gifts so hopefully they won't count for SFS anyways; so my total for this month comes to $16.97. 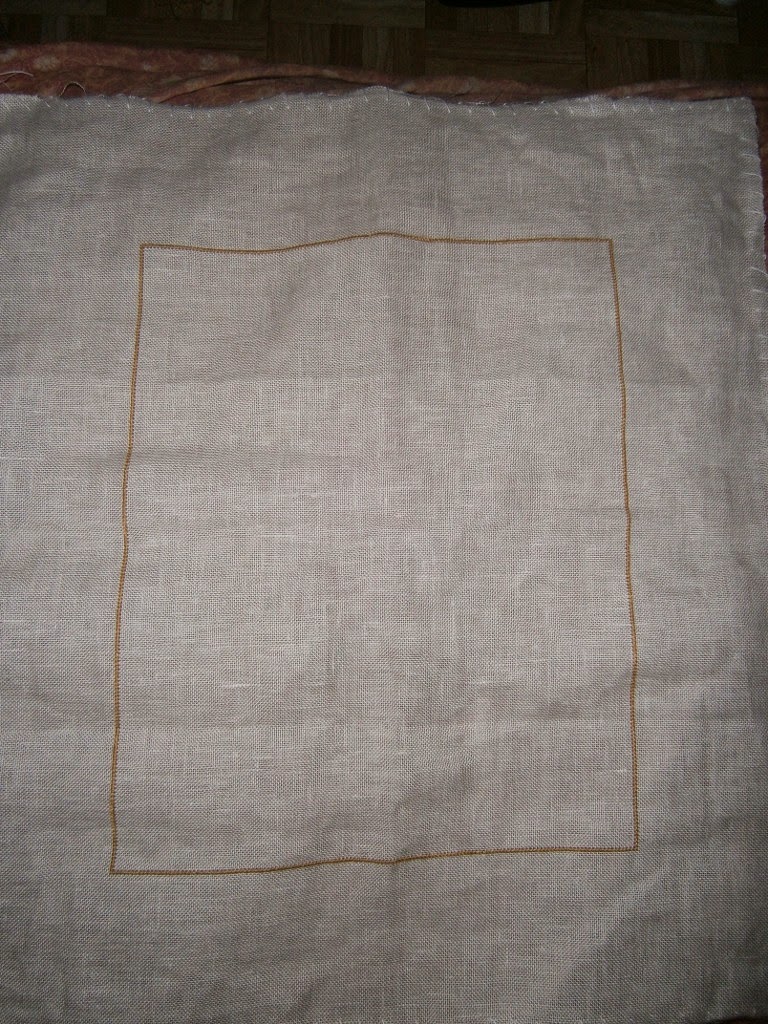 So much for the fomalities, on to stitching! I have to admit that I have officially given up on working with a scroll frame. Just can't make it work, nope. I didn't even like what I had stitched so far as the stitches just didn't turn out as even as I'm used to, so I ripped the few hundred crosses I had already done out, got the fabric out of the frame and into my qsnap and started anew - I already finished the very outmost border (142x174 stitches), and it's just so much better. I'm loosely timing myself on this by the shows I watched, and up until now I have spend about four hours on it. I shall think now some crocheting, than on to the inner edge of the border!

And speaking of shows, there has been quite a bit of watching, even more so since I spent the last few entries babbling about other stuff. So, let's see...Felix and I watched some NCIS (S10, E12-19) and soon we will be done again with what is avaiable via amazon prime, which is a little sad, I really love that show. Also a few movies - The Whole Nine Yards with Bruce Willis and Race to Witch Mountain with Dwayne Johnson, both quite entertaining (plus I finally know where this meme is from!)
Alone I started watching Scandal, which is a real great show involving lots of drama and intrigues in Washington DC. I really liked it and watched the whole of S1 (which is only 7 episodes, but still) in one day, and am now on E7 of S2. I also saw the first two episodes of Haven, but since it will be taken off amazon Prime in a few days I didn't want to get to much into it. Still hoping they'll bring it back eventually though. I also watched Beverly Hills Chihuahua (better than I thought, reminded me somewhat of Homeward Bound: The Incredible Journey, which is to this day one of my favourite Disney movies), The last Song (one needs a little sob stuff from time to time, but this was suprisingly good) and Nichts zu verzollen/Rien à déclarer, a French/Belgian comedy about the opening of the european borders and some customs officers who did NOT like that at all, I really like that one.
And to close this post, some good news: amazon prime Germany just announced that starting June 15ths, the first two seasons of Vikings will be avaiable. Really looking forward to watching that ^_^
Posted by Leonore Winterer at 21:08

I'm hoping Vikings will show up on our Netflix, I've watched the first couple cause Carla told me to, but downloading is a pain. Why do the foreign (for me) movies always sound like the best ones.

and yes, I also love how you manage to stay under budget every month. When I go hog wild I usually far exceed the monthly. But for this month I'm zero! OH! And I have a package coming your way as of today <3