So, it's the tuesday after Easter now, and even in Germany, the weekend in therefor April IHWS is officially over - so let me share what happend. In case you're wondering: Firefox is still on strike, so I decided to ditch him and I'm now using Chrome for all of my blogy needs.

I have to admit that I haven't been very good this weekend. I already told you about lots of the things that keep me from stitching at the moment, and even though I got to join my girls in the hangout for some much appreciated girl time, I didn't get a whole lot done. The best I can show you is my progress on Lady & the Tramp, which has now been on the go for almost exactly one month - not bad at all if you consider anything else I had going on! 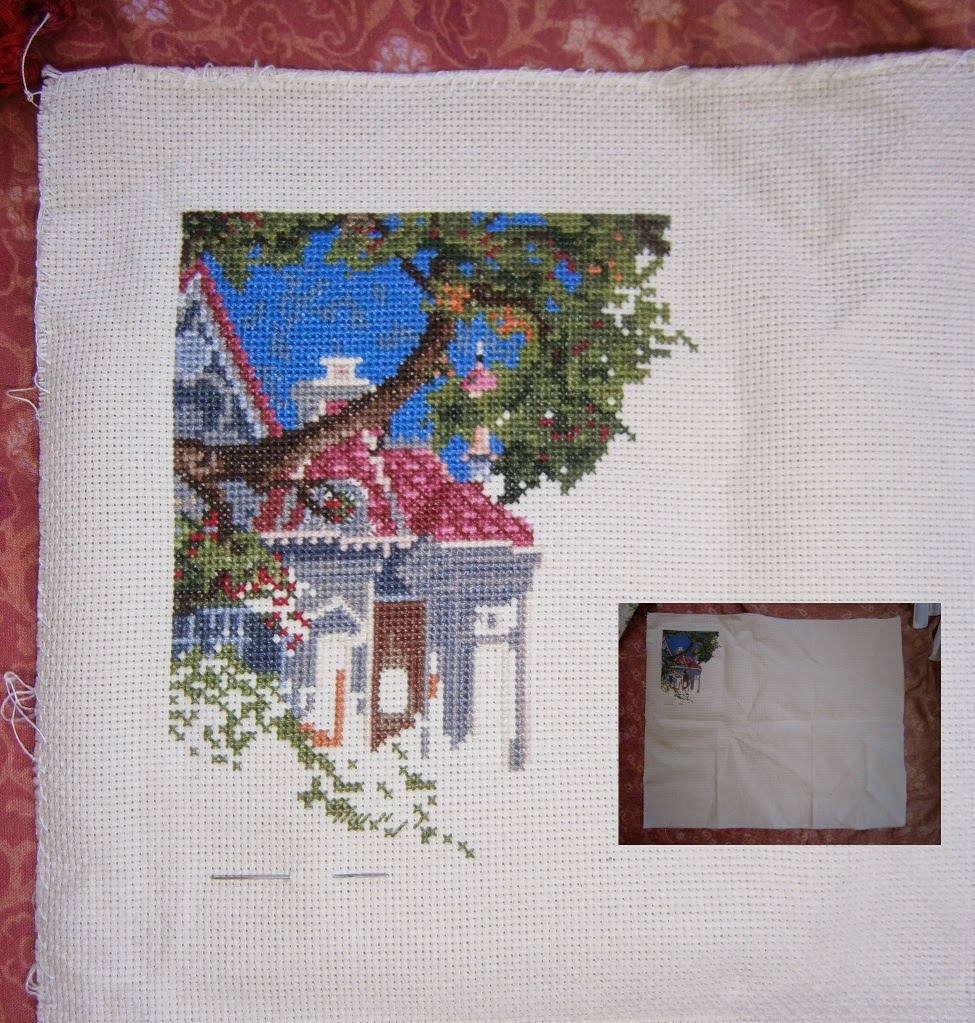 But there is still a lot left to do - I included a picture of the full fabric for scaling reasongs. Let's see how long this one will take me, yet alone all the other from the collection I want to make.

Then came yesterday, and I was really determined to work on PT and eventually get this next border section done in April. So I put in a few stitches here and a few stitches there...and just couldn't get into it. At all. So I decided that it would probably be for the best to put PT away for a while. It's not forgotten, and I wont't let it become one of these oldold UFOs - I'll just try a few stitches here and there and hope that eventually, I'll feel like completing this endless border.

So what now? Of course I could have been a good girl and work on one of my WIPs, and maybe I would have, but my grandma kind of convinced me to start something else. Not like I didn't want to anyway. You see (and with that, let's just include my SFS-post here as well, I'll be too busy this week to think of buying stuff anyway), I really wanted to be good this month, but then I made a big mistake and went over to ebay. And there was this woman who apparently bought kits, used only the fabric, than resold the pattern and the floss, and I was lucky to get Joan Elliott's 'Angel of Cross Stitch' this way for only 4.28€ ($5.91). 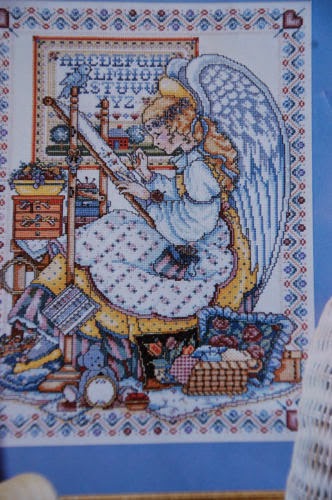 I thought I would be safe to not start it yet because, well, no fabric (I originally wanted to get something colored or with some kind of pattern on it or something, but upon realizing that all that white in her wings and shirt and apron isn't stitchted but just the background shining through, I decided to stick with white), but then I realized that I did, in fact, have the most perfect fabric for it: remember this white 28ct evenweave I originally got for The Enchanter until I figured out where to buy the perfect fabric? That one is the perfect replacement for the 14ct white aida missing from the kit. So...I started it yesterday. Found out the fabric is awefully soft, so I have to be really careful as to not disort it while stitching (don't know what brand that's supposed to be anyway...), but if I am, it turns out just gorgeous. So...looks like more border stitching for the time being (I wont cut the fabric before finishing the upper border so  know exactly how much I need), but at least this one is much simpler than the one on PT (at least I think/hope so). 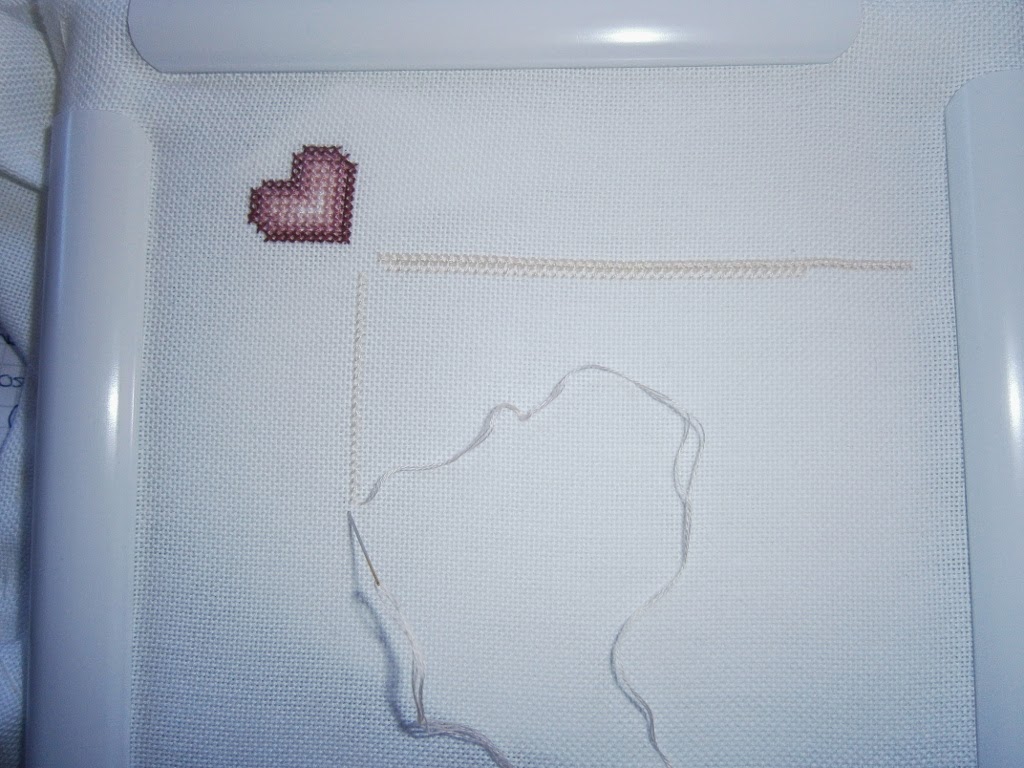 when I switched to Google Chrome my life became SOOOOOOOOOOOOOO much better. I don't have issues with it at all and if you need help there is a very wonderful help center (far superior to Microsoft and Firefox) with tutorials and videos for the visual learner. It's Chrome all the way....my computer, my Motorola Xoom (like an iPad) and my phone!

I liked the second picture as a "scale" you have taken on a big project!

The Joan Elliott pattern is beautiful. Love her designs. I need to avoid e-bay and such sites till I'm done with moving so I should be good to go with my budget ;)

I am avoiding ebay for just that reason, it would blow my budget so badly, but I really love that pattern. Good find for you. And as Carla says I do approve the Lady and the Tramp, not just for size, but because it's beautiful and makes me want to buy the Lion King and Sleeping Beauty ones.

Haha, true, Lady & Tramp is rather on the large side, but I'm determined to see it through to the end! CS Angel as well, Mel says she has seen dozens of starts on this one but not a single finish...I wonder why that is?

Chrome really is nice, I'll have to do some research concerning safety issues (missing my Ad BlockPlus and NoScript Addons...), but for now I'm only using google sites anyways.

Thanks! I might start doing that with all of my WIPs, it's a nice way to show both a close up and the overall progress :)

Me to, there are a lot of her designs on my want-to-do-list...thankfully, most of them are much easier and less complex then TW, while still being reallyreally pretty ^_^

I'm trying to not do much biding, just a few € here and there and no re-bidding when someone goes over me...still making the odd good catch as you can see, haha :D