I already had a few thing s ready to show for GG last Friday, but then stuff started happening (grandpa had to go to he hospital because his kidneys were close to failing and his blood count dangerously low...four days and a blood transfusion later, he's back home and improving, but it made for an interesting weekend) so I decided to keep stitching over IHSW and give you the results together - and that contributed even more to GG as well, so I guess it was not a bad decision. Anyways, let's get to the beautiful stitching in chronological order!

The weekend before IHSW, we were visiting Felix' parents, and I had this pair of socks I wanted to give to his dad for Christmas and then lost interest in after missing the deadline. Over the last few weeks, I had slowly been working on them again, and finally finshed them to give them to my almost-FiL on the Saturday. Here they are modelled by Felix, who wears the same size: 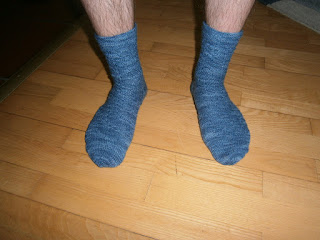 Then I was working on my monogram bookmark - there was a little delay in announcing exchange partners and I had to hurry to get it done. I did the monogram and the first bit of finish-finishing on the weekend, then added the backing fabric just in time to send it out by the deadline. It hasn't arrived at it's destination yet, so I can't show you who it's for! 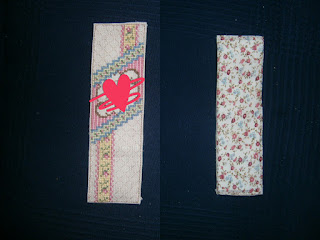 In case you want to stitch one of these for yourself - I'm giving away the pattern and leftover floss! Some colours might even have enough to stitch another full bookmark, others should at least be enough for colour matching against your stash. The pattern comes with a full alphabet of monograms too. If you want to be entered in the giveaway, please let me know in a comment until the 30th and I will do a drawing then.

With the bookmark out of the way, I focused on 99 again. I think I had about three bottles left to go on the page on Friday, and got to celebrate a page finish by Sunday. Only 15 bottles left to go, but I think I'll try and finish a page on Fire and Ember before I get back to them. 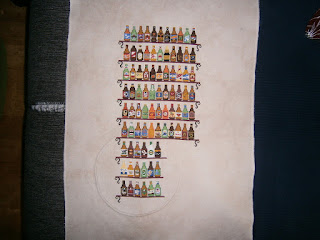 I also worked on The Mermaid a little, finishing the third blue in the inside of the border. I'm kind of torn between wanting more time to work on this, and being scared that the border will get boring once I do! 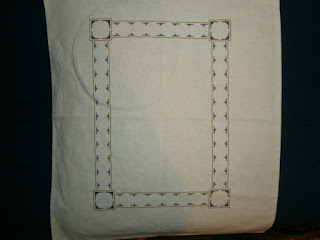 Aaand last but not least, I worked on the Ambarussa loop a bit (in the car, in the hospital, whenever I had some time to do so) and finally finished it on Monday! I love the colours, and Felix is very happy with it, so full success, yay! 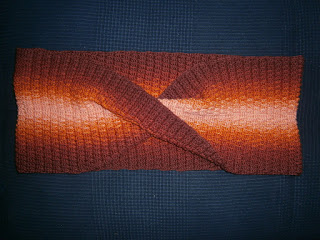 So here you go - lots of working on gifts lately! I do hope to have a full finish on 99 by the next GG checkin.

Posted by Leonore Winterer at 09:20

I hope your grandfather’s health is continuing to improve!
Those socks look great, and well done Felix for modelling them so well!
Wow, lots of progress on the mermaid. 99 bottles looks fantastic!
What is Ambarussa loop? Is it a hairband? Love the colours!
Hugs
Barbara xx

Great progress! The bottles are so close to a finish! Well done.

Hey I'm back with a new little blog :)
Great socks!!! :)
Love the 99 bottles design, and you've made great progress while I was away.

You had a nice GG IHSW acronym extravaganza! The infinity scarf turned out great in that colorway. Love the sock colorway too!

Glad to hear your grandpa is back home and doing well. Such great progress on all your pieces. I love the colour wool you have used for the loop - was it a colour change wool or did you have to use several wools? x

Perfect socks Leonore and a lovely bookmark gift for your exchange partner. The bottles seem endless and quite a challenge to finish so many.

Thanks for taking part in GG this month. Sorry to hear about Grandpa, glad that he is home again.
Great work on all your projects despite the emergency. So close to a finish for 99 too!