Another catch up post, while the main bunch of participants has already reached the letter 'T' I'm still on 'M'. So here is some 'M'- stitching - a Meerschweinchen, German for guinea pig (Meerschweinchen literally means 'sea piglet', as in 'piglet that came from overseas'..but the animal is cute, in any case!) 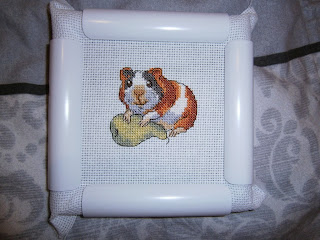 I'm nor sure if the word I picked this month is actually intranslatable, but it is one I particularly like - 'menscheln' (literaly 'to human'), usually used as 'Es menschelt' (It humans). It's used when stuff happens that is especially human in nature, and can be used in both directions - both with stuff that leads to conflicts, like jealousy or envy, but also when showing empathy and warmth, especially in situations where those are not common usually. It's usually used to describe 'human weakness', but also in situations where this 'weakness' is positive in nature (like not making a tough business decision out of empathy).
Posted by Leonore Winterer at 14:14

What a cutie!!! Seriously look adorable :)

love the guinea pig, so cute! A friend had some and I had no idea they kind of purred. It was very neat.

I had to go and disbturb my son to tell him about the German word for guinea pig! He is so cute, did you use him for a blog hop once?

The stitched animal is cute, but I don't find the real ones so nice. "Sea piglet" reminds me of English lessons - Sea-See (words that sound alike but have different meanings and spellings) and all the English words for baby animals (in Japanese you just add ko which means small to any animal name). Do you have a pet?

What a cute picture Leonore.

Such a cute guinea pig, I love it, and I love the language lessen as well.

We had guinea pigs until just recently. This piece is too cute though. Thanks for the info on the M word.

Hi there would you mind sharing which blog platform you're working
with? I'm planning to start my own blog soon but I'm having a
hard time making a decision between BlogEngine/Wordpress/B2evolution and Drupal.
The reason I ask is because your layout seems different then most blogs and I'm looking for something
completely unique. P.S My apologies for being off-topic but I had to
ask!

It's just a standard design from blogspot, nothing special :)