The third post in one weekend - I'm on fire here! In fact, I was just shocked how long ago my last update has been. I kind of lost momentum with plowing through my list, which isn't very suprising, it's more suprising how long I stayed focused on my target. Recently, I'm craving gaming more than crafting, and while I still intend to finish a few things before Christmas (and I still think I can do so too!) I'm giving myself a bit of a break, so things have been slower. Still, progress has been made, so let's talk about progress!

First, I corcheted this little purse for the now big sister of one of the babies I knitted booties for earlier this year. It was a fun little pattern from ravelry, although I picked my own colours. I had originally ordered some prett cottons, but seeing them in real life I didn't really like them together, so I used the same yarn I used for that owl purse I did a few years back since I really enjoyed those. As usual, the actual crocheting went fairly quickly, but it took me ages to get everything sewn up and finished. It's pretty cute though, that base circle is a little less than 5". 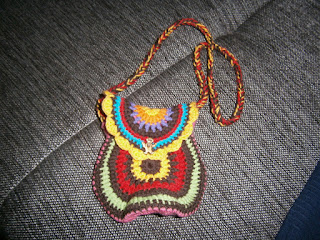 Next, I started the third of my four hats - this one is all blue and for my grandpa, and it's almost done! Well okay, not quite done, but I'm almost ready to start the decreases, and once I get to those I will be nearly done, so it counts! 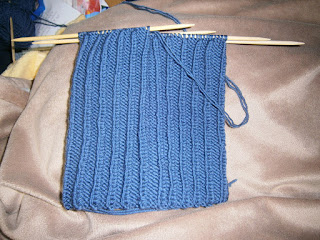 I also stitched up the next of my Mill Hill ornaments - a cute little polar bear and a gift for one of my favourite coworkers. I'm just in the process of finish-finishing this one and his brother the panda into ornaments. 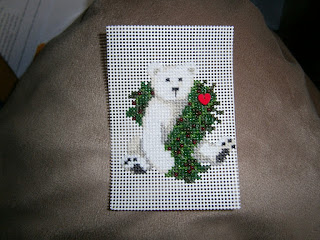 Of course I did not forget about my corchet a week thing. Here are week 3 and 4...actually, the second take on week 3, as the first time around I somehow completely missed one of the petals and made the think five sided instead of six. But it came out nicely the second time around, and so did week 4. I almost finished week 5 too, which is a shame as I just remembered I should have uploaded week 6 today...so I have some catching up to do here! 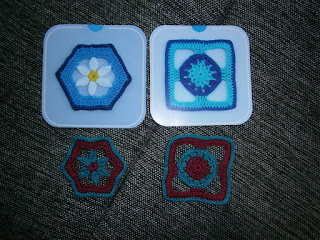 Next on my list was working on these basket socks...no idea why these have been going so slowly all this time, because once I sat down, I got the toes of the first one done really quickly, and the start of the second one as well. I think I'm about 1/3rd done with that one, so hopefully, I'll get the heel done this weekend. 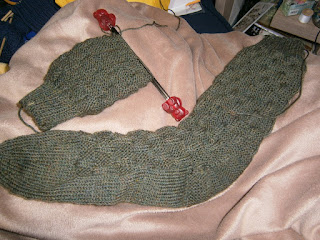 Lastely, this weekend I finally got around to blocking Lestrona, and I think it looks really nice spread out like this, so I wanted to show you. Just a bit of waiting and it will be finish-finished for real! 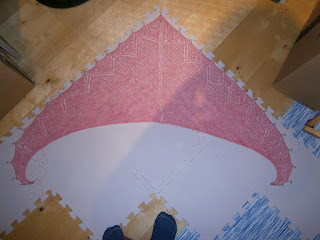 So...I kind of wanted to have all my Christmas crafting done by this post, and I haven't, but it's fine. The only thing I really need to do before Christmas is finish that hat and that sock, and that should be very managable. Everything else, I can work on in my time off after Christmas in peace and quiet. Here is the current state of my list:

Of course I already have more planned by now, but I will add that next year. For now I'll just focus on getting those last few finishes I need to do, and being proud of myself!

Posted by Leonore Winterer at 00:56

That polar bear is adorable! I'll bet the panda is just as cute.

WOW!! You have been BUSY! It's no wonder you're a bit worn out. Everything looks great, but I especially like the little purse.

Thanks for taking part in GG this year. I also love the little purse, such bright colours.
The polar bear ornie looks great too.
Well done on meeting so many goals and you've still got a couple of weeks to go!

It's funny how you say you haven't been doing much, but wow! Great work on everything. And almost crossing all the deadline things off your list, excellent!

That sure looks like a lot! Lots of pretty projects :)