October TSAL, GiGi and other stuff

Please forgive me, as it's been an awefully long time since my last regular post - but then, I've also been awfully busy! First, we visited Felix' mum for her birthday (his dad couldn't be home as he was in rehab after hurting his knee and Felix' brother just moved out, and Felix' didn't want her to feel so alone), then we went to Berlin to visit my best friend Steffi - which was awesome (but also pretty exhausting because long drive). We went shopping (there's a Bahlsen store were they sell second-choice products of cookies and chips and choclate and lots and lots of delicious stuff pretty cheap), went to an awesome Ramen place for lunch, watched Inside Out at the cinema (AWESOME movie! Go watch it if you haven't already, but probably you have since it came to Germany really late), talked and laughed a lot and on Sunday we had tea/coffee and cake with two other friends of Steffi and me that I hadn't met in person before. Less awesome stuff that happend contains my grandma's second karpal tunnel surgery yesterday (went okay so far) and some problems at work, which I'm tired talking about so I won't.

On to pretty pictures stuff - through all this, I tried to keep up with my stitching, and was more or less successful. I'm still working on My Day Off, so the lady has now half a leg, a bottle of wine, and a gramophone. There's also some more background and I started working on the vines that form the upper border of the design. 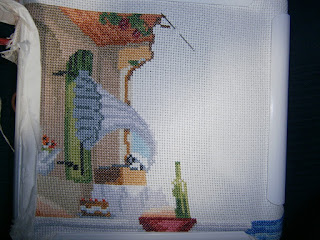 I also worked on the Halloween SAL, although I am terribly behind - I did two more blocks, the W and the first E. On the bright side, as you can see, I can now work on the whole thing at once - Steffi was in Florida in September and brought me a set of the non-slip hoops Carla and the girls keep gushing about, and the big one just fits perfectls. They are really awesome, but I will still use my Q snaps as well, depending what I'm working on. 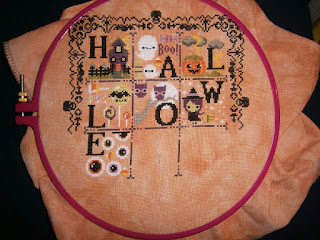 Sadly, this will have to pause for a bit, as there is another baby on the way and I have to make another BSJ. I just started knitting this week so there's not much to show yet, but I will try to finish quickly! 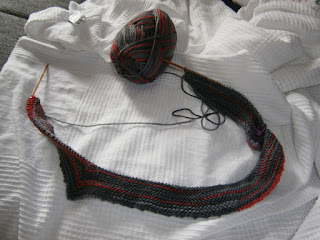 And since I also missed the TUSAL checkin, here's my jar for the month: 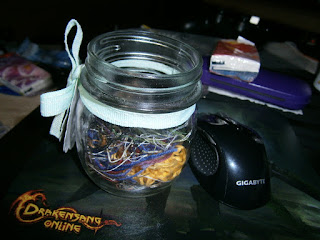 Now among all the stress, we still managed to watch some stff. At Steffi's she made us watch Hairspray, which both of us didn't know before, but really enjoyed (and we were suprised at how deep the story went). At home, Felix and I finished S1 of Elementary (E18-24). I really liked the ending, it was quite a suprise! Now before we watch Season 2, we want to catch up on some other things, so we went back to Fear the Walking Dead (S1, E3-6). A rather short season, but it has some interesting characters, so I'm curious what will happen next. Now we are back to Supernatural right where we left off (S7, E14-18). Some interesting stuff has happened already and somewhat made up for all the sad and depressing things that happened before, so I'm pretty into this again. And we also continued to watch Case Closed (E103-115).
There also was some gaming - I'm mostly playing The Witcher 3 these days, but I finished two short ones: Actual Sunlight, which is more of a short visual novel about a guy with severe depression, that mostly seems to aim to get you thinking, which I found quite interesting, and Super Explosding Zoo - probably the complete opposite, little story, more gameplay, and pretty crazy: You controll a herd of bomb-animals that have different skills and abilities and have to defeat some aliens that are attempting to eat their eggs by exploding on them.
I also finished reading a book I got myself in Berlin - The Last Days of Rabbit Hayes by Anna McPartlin, and I highly enjoyed this one. It's about a woman who's dying from cancer and her last days in the hospice, and how she tries to make things right with her family, and her family with her. Sounds pretty depressing, I know, but the author manages to focus on the good parts, the laughter in dark times, and the good times that were and will be had. Still made my cry, but in a good way :)
Eingestellt von Leonore Winterer um 10:02

You've been busy! Your stitching and knitting are lovely. Congrats on the new baby :). I'm sorry things are still rough at work but you seem to be focusing on the good things which is great! I'm glad you had fun with your friend those are some good movies

I like how you say "another baby on the way" and I thought you were talking about yourself. I scurried to see where I missed that post!I know what you meant now *derp*. You've been busy. I really like the Halloween SAL. It looks great so far. Did I ever say I love the fabric too? Well...just in case...LOVE that fabric.

Thank you! It's not my baby though, I'm just knitting these jackets for friends and coworkers and it's the third I get to do this year ^_^ Sorry for the confusion!
Getting home and getting some knitting or stitching done is, in my opinion, really the best way to relax and forget all about work and the corresponding stress...

Haha sorry, I probably should have clarified as it's causing some confusion! It seems like everyone around me is reproducing at the moment so I'm getting lots of practise with knitting this kind of stuff for when it really is my turn one day (probably a few years down the road, though).

Great work on everything! I love, love that Halloween one still. Good to hear about Elementary, I just started watching the first season.

Thanks for taking part in GG this month. Everything is looking great, especially the Hallowe'en sampler.
Laughing at the baby confusion!