I did pretty good this month, but honestly, it wasn't on purpose - I ordered a pattern in the beginning of March, and was planning to get supplies for that later, but after almost three weeks they haven't even sent me a paypal invoice, yet alone sent anything. So since I can't be sure if this purchase will work out, I won't be counting it yet, and naturally I haven't bought the supplies yet either. So the only thing I really did buy was a small pattern from The Frosted Pumpkin Stitchery called Leaning Tower of Macarons - it's an old pattern they are going to discontinue, and just to cute for me to pass. They are discontinuing quite a few patterns, tomorrow, in fact, so you should take a look at them now.

In terms of earning, I finished another one of Magical's Ornaments of the month, worth 4€ at 35x35 stitches. So if my calculations are correct, I have now 63.9€ to spent. 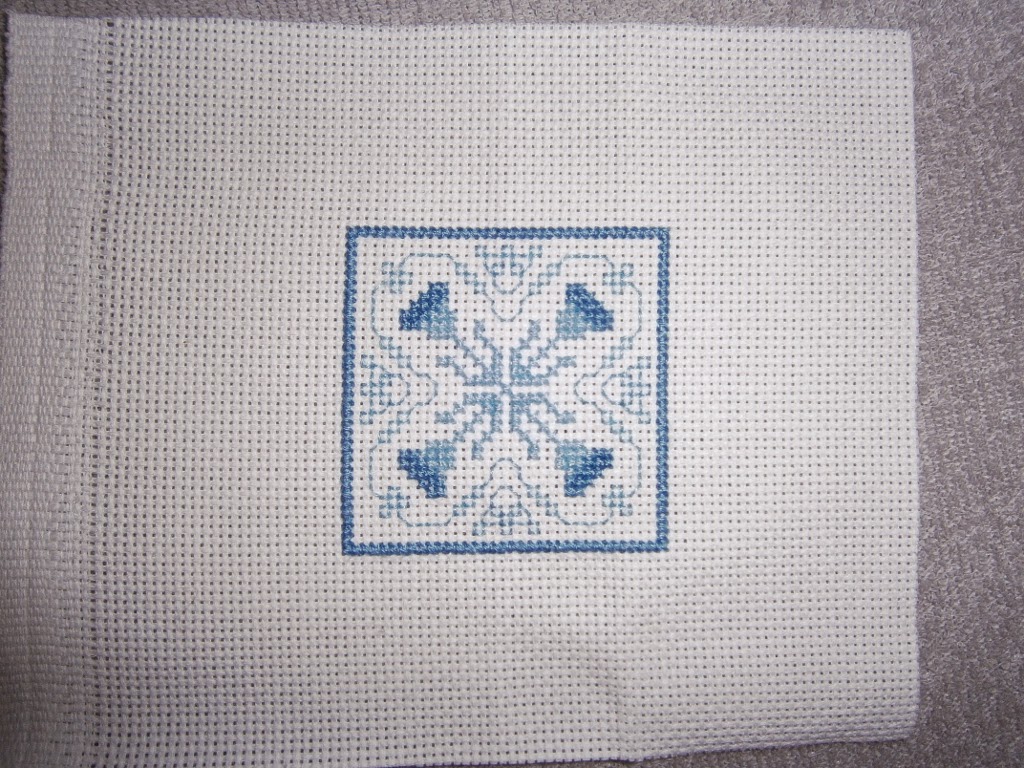 But just because I didn't spent doesn't mean I don't have any pretties to show! In fact, there's quite a bit, starting with my monthly thread shippment. I almost got one full box now - I have two more, but I think I will need another two to store everything. This month, it came with a few bobbins (sadly of the paper kind and I don't like using those) and a blue-creme hand dyed thread called 'Moscow'. 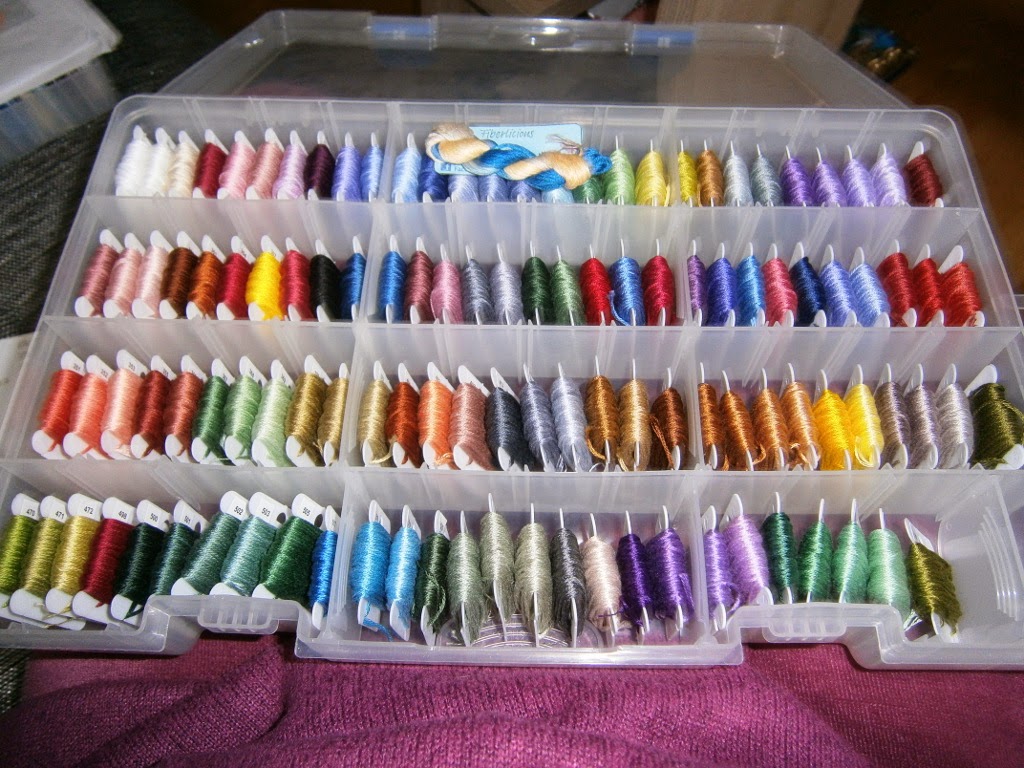 Then, my dear friend Carla (if you've been lookin for her, her blog has moved, so click her name to find her again) set another example for her amazing generousity and sent everyone in our little hangout-group of stitchers a mysterious squishy envelope filled with all kind of goodies from her recent destashing experience. Everyone got a few patterns (for my, some lovely Sue Coleman otters and a beautiful life tree), a bazillon little bead bags (sooo many pretty colors) and a dragon needle minder (DRAGON!), and I already got a bit of floss she knows I need for a project I have planned. So THANK you amazing generous Carla, godess of the berserker stitchers, for this most awesome squishy there has ever been! 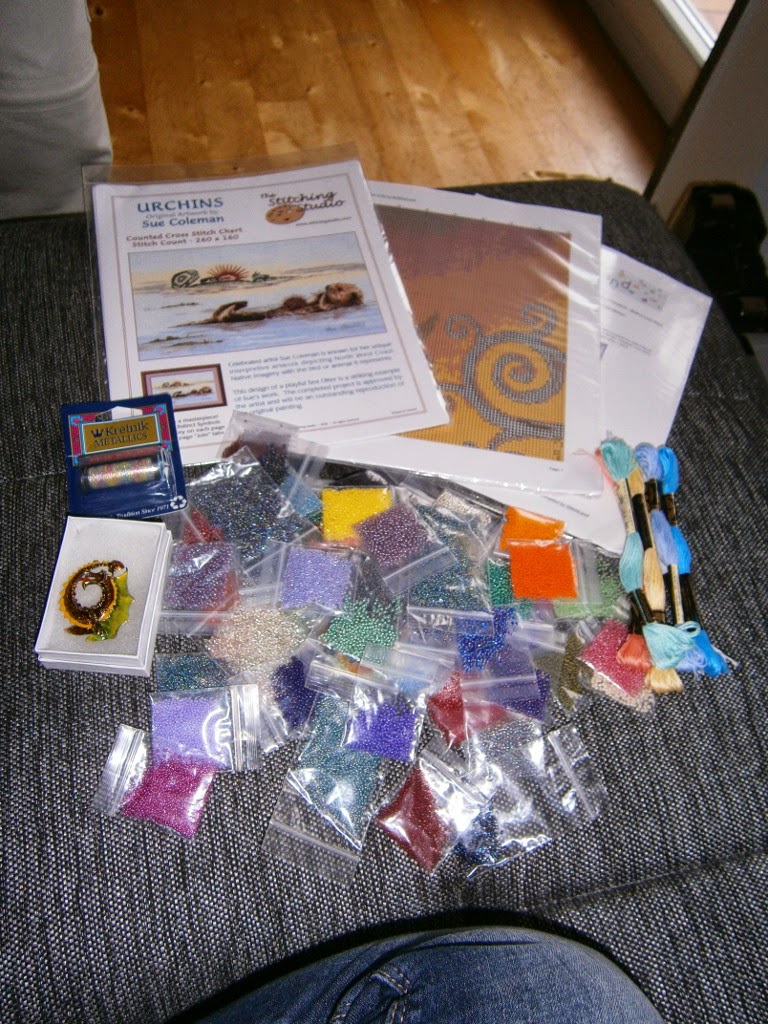 Anf last but not least, I got a late stitchy birthday present from my grandparents - it's Glendon Place's A-Maze-Ing Dessert, Red Velvet Cake, together with a threadpack of awesome handdyed silks. As you can see, this is what the Jacobean sampler linen I got earlier this year was meant for, and I think it fits really well with the floss. All I need to get know are the beads, but I won't need them for a while, so no rush there. I'm totally in love with this, the patter is even more beautiful than the preview picture online was, and the silks are so pretty and so SOFT, I'm almost scared to start using them! I don't know when I'm starting this, I know I should finish some stuff first, but we'll see if I'll already hold on that long :) 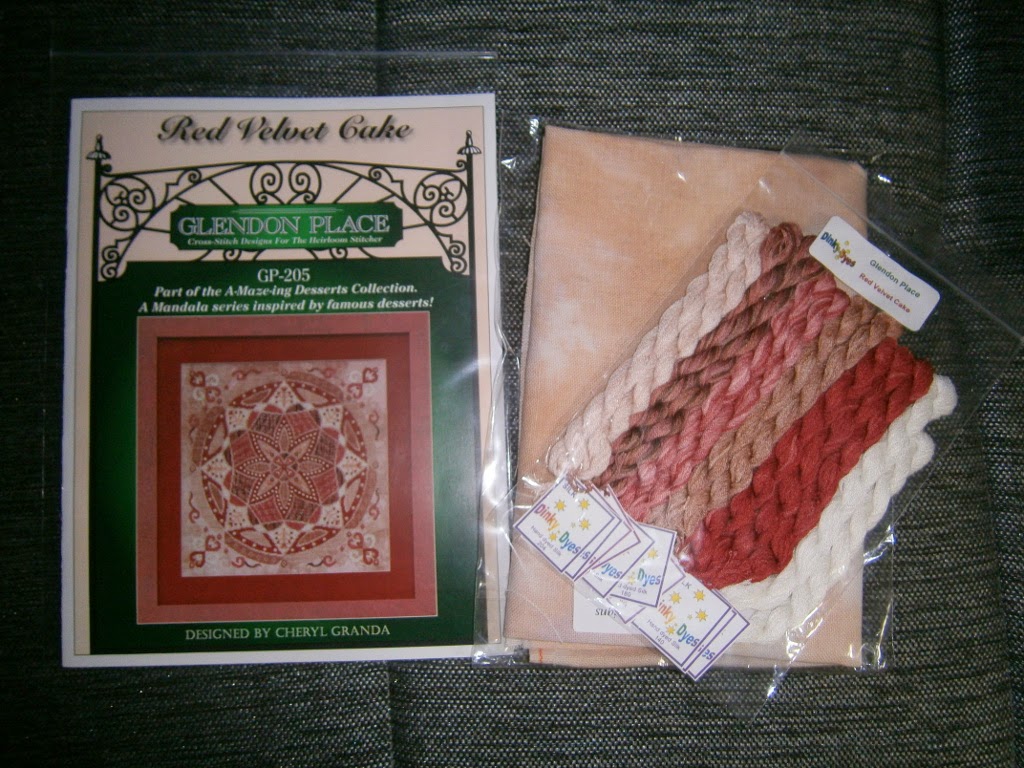 So that's it for now, regular post will be up sometime this weekend I guess.

Posted by Leonore Winterer at 20:14

Wonderful gifts you received! Well done on staying within budget.

Red Velvet and Silks!! To die for!!

So much awesomeness and no spending - well done! I love how your ornament turned out <3

Love all of your pretty new stash Leonore.

Great SFS report :-) I love your finish, and your new stash is very exciting.

Wonderful job on stitch from stash. You are right, the macaroons are too cute. Amazing gifts! The Glendon Place silks look yummy.

Thank you - who doesn't love getting awesome stitching gifts? :D

They really are, I think I will need some more of those patterns + the corresponding silks eventually :D

Thank you :) I love your ornaments and can hardly wait to put them all together in the end!

True, those stories are always wonderful to read ^^

Thank you - I think I really will have a lot of fun with my new pretties!

Thanks! The silks look amazing, and they are so soft, I want a bed made out of those haha :D