So I think it's time I finally sit down and write a bit about all those SALs I am planning to join in 2015. There are quite a few; and I thnk it might avaid confusion both for me and for you to have them all neatly together in one place :) I joined quite a few, hoping they will keep me in the routine of regularly posting to this blog - most of them are rather low effort though.

First, there are a few old friends that are back from last year: Measi is doing another round of WIPocalypse, a rather low-pace SAL where once a month, we talk about our progress towards our goals and also about a monthly theme. It was quite fun to take part in last year, so I'll be back in as well :) I'm still waiting for a new button for this one to add to my sidebar.

My good friend Carla is also doing another round of her The Magnificent Teresa Wentzler - I'm quite excited about that, as it was my very first SAL I joined last year. This one is easy as well, it just requires you to stitch on something designd by Teresa Wentzler, and I still have one started (PT - given I can finish AoF before christmas, what I'm still aiming for), two kitted up (12 Days of Christmas & The Enchanter) and quite some more planned.

Mel's Stitch from Stash is also back for another year, or rather for two half years. This one requires you to spend no more then $25 (or an equivalent in your own currency) on stitching supplies like fabric, floss, and patterns. I do have to admit that I'm probably quite the unusual participant for this, as of the beginning of 2014, I had no real stash to speak of. I'm using this a bit differently than it might be intended: Not to stop stashing, but to controll it. So - stash as much as possible for as little money as possible. I think it will be good for me to continue this for another year, because soon I'll start actually working, which means more money to stash, but less time to stitch; so it will be good to have that controll unit. A few of the rules have changes this year; and I will talk a bit more about how I'm planning to change my habits accordingly in the final report for this year, later this week.

I haven't had any word yet if ISHW will continue on into 2015, but either way I'm sure me and my girls will try to sit it anyway :)

Now on to the new SALs I joined for next year...first up, there's another one hosted by my dear friend Carla, called ToT (Tons of Tiny), which focuses on all those small and quick patterns most of us tend to hoard. The goal is to finish at least one a month, and I already have some plans and patterns laid out for this.

Then there is Gifted Gorgeousness over at Jo's place, which is a SAL focusing on projects that are either meant to be gifts or where some of the supplies have been gifted to you. I have quite a few things lined up that fit that desciption - most prominently, my Lady and the Tramp-WIP was a birthday gift, and most of what I stitch is meant as a present for someone anyway.

Stacy over at Crossed Stitches is hosting two SALs as well: Her New Year SAL is about making progress on a HAP (Huge A... Project), where the smallest dimension is no less than 300 stitches. As I'm planning to start my first project of the sort in January, that's a goo opportunity to get some motivation from the teamspirit. Here, I'm also taking part in my first 'proper' SAL, as in 'Actually stitch a part each month' - she's doing a band sampler, and I'm really looking forward to join that, I just need to get my supplies ordered before then.

In terms of my new, big project, I'll also be guest-posting at A Stitchy Start, which is about starting a not-to-small project in 2015 and posting aout your progress.

Last but not least, there's also my own DESIGN SAL, which I've told you about before: Each month, work on a WIP by a different designer, than post about both them and the piece at question. Sign ups are still open, by the way! ;)

So as you can see, I have quite a few things planned for new way. Details will follow in my start posts for each of those. I hope I haven't forgotten anything now, if I notice later, I might add it here, and mention in in a new post as well.

And to not end this post without a picture, have another sneak-peak at my beading progress on AoF: 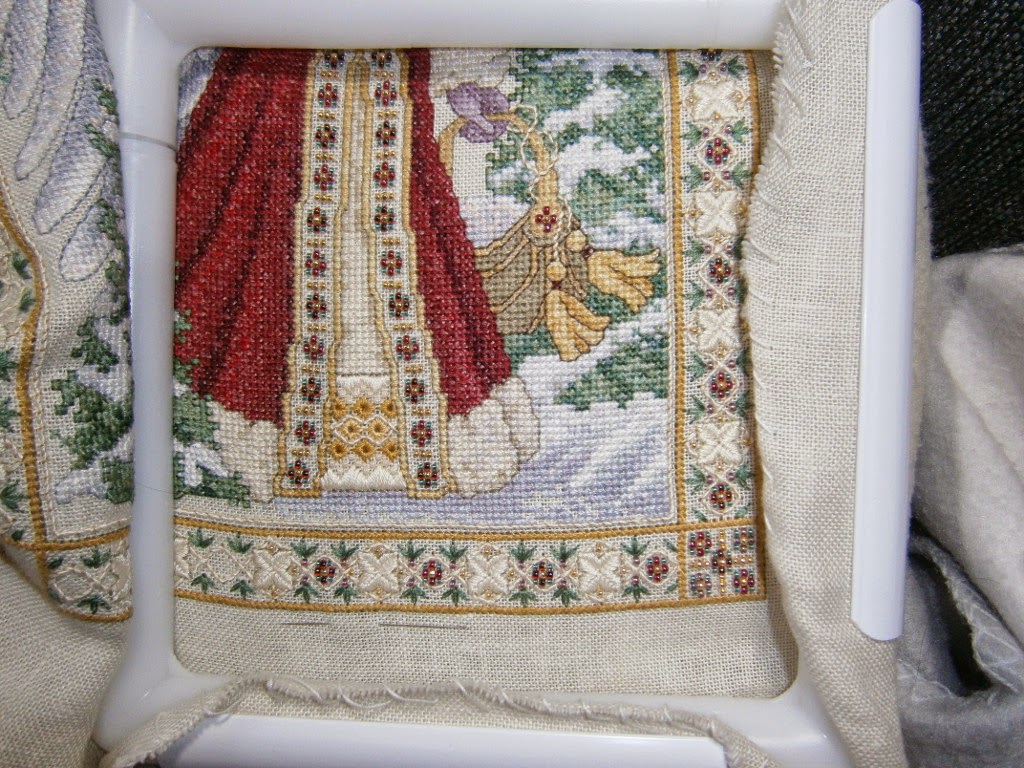 Posted by Leonore Winterer at 15:57

You are going to be a busy gal. Since I have been offline for several years and I'm still in recovery from an accident I have chosen to only join the Stitch Start. I will definitely check back here to watch your progress.

That border is so GORGEOUS.
I love all of the SALs I keep stumbling into, though I can't bring myself to Stitch from Stash... I don't think it would be difficult, but there are some lemmings (things I would jump off a cliff for, if I can find them) that I couldn't allow myself to not buy :)

Can AoF get ANY prettier? so unglaublich schön!

I love all of the SAL's you are doing this year and will have to add the new ones to NCCIH if you don't do it first :D They all blend so well together which should make it very easy to participate in everything and not feel overwhelmed.
<3

We are in quite a few SALs together. I do love the way they all fit together and they certainly do help me keep on track with my stitching and spending. AoF is absolutely gorgeous! Love how the beads add that extra pop of color.

Ooo the beads ^_^. I'm afraid to join SALs because I'm a commitment phobe. How did you initially feel with joining your first SAL? Was it intimidating?

That's okay, just start slowly :) Justs o you know, there's plenty of SALs that you can also join at a later point in the year, if you feel like doing so. Looking forward to SFS together with you! :)

Thank you :) I understand the problem with your lemmings (and I love the term!), but you did join a few lovely SALs nevertheless :)

Thank you Carla :D Them blending together like that is kind of the only reason why I dared to join that many...there are a few more I'd love to join, but they would requite specific new projects, and I don't want to commit to any more :(

Yep, I'l really looking forward to read about your progress in those! Thanks, I'm very happy with the beads myself :)

Well my first SAL was the TW one, which doesn't come with a lot of commitment, so it was okay. SFS was rather intimidating at first though, it does have a lot of rules, but it went rather well I think :) Maybe you should try joining WIPocalypse for a start, that one is really fun and doesn't require anything specific at all :)

Looked up WIPocalypse and it looks fun! It's a nice starter for someone who hasn't been in a SAL before ^_^. I'm probably going to join for 2015. Thanks!

eToro is the #1 forex broker for newbie and full-time traders.

BlueHost is ultimately one of the best web-hosting provider for any hosting plans you need.