While I'm still pretty busy, things seem to be calming down a bit. Work is still trying to be a pain in the behind, but I'm confident it will work out - either I can work around the issues on the current project, or admit defeat and start clean with a new one eventually. And our social-business has been reduced from travelling all over the country to visiting friends around town and doing stuff around the apartment, so basically, preparing for a good, long hibernation. Either way, I had some time to craft this week, and as I was fully focused on two pieces, I made some decent progress as well. But before we get to showing pretty pictures, let me first anwser this month's question for WIPocalypse: Are there any fibers or materials used in stitching that you’re nervous to try?  To be honest, I am nervous every time I try something new - it's not about certain materials specifically, it's a more general thing. I was extremly nervous trying silks for the first time as they are so expensive, but then it was much easier than I thought, so probably all the other stuff will as well :)

Now to my progress: I was working on My Day Off, and had a lot of fun with the vines, the last big confetti-region of the design. I wasn't to thrilled when I first looked at it, but then I just did one colour after the other and it went really smoothly. The tub-lady also has the rest of her legs and a lovely little cat now, so unless I forgot a few stitches in the vines-area (which is very well possible), I only have one colour and the sky left to stitch now (and some back stitching, of course). 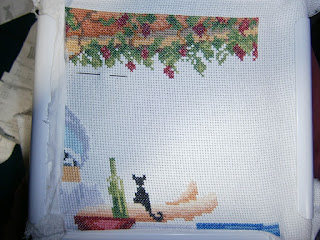 The other thing I worked on was that baby jacket I mentioned last week, which caused so much confusion - it's for a friend of mine, not for myself, and it's about halfway finished now: 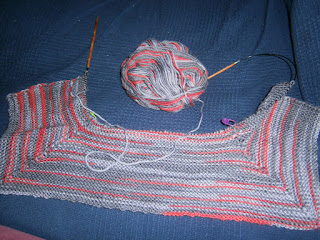 So, what else happened...lots of watching to warrant all that crafting, of course! We finished S7 of Supernatural (E19-23) and just started E8 today. I liked the S7, but somehow the end felt...less dramatic than it should have for everthing that happened, and now S8 starts with the same feeling for me...I hope I can shake it up after a few episodes. We also started S2 of Elementary yesterday (E1-4) - of course this feels rather slow now after that high-speed finale, but that was to be expected and I still like it. Last but not least, some more Case Closed (E116 - 125), of which I also read to more volumes (7 & 8).
I also finaly got around to playing The Vanishing of Ethan Carter last weekend, a short, but very sweet mystery-game with some interesting puzzles and unexpected story twists. Short, but very enjoyable and interesting :)

Posted by Leonore Winterer at 20:54

Great progress on both and thanks for the reviews too!

Hehe, glad no more confusion. I keep forgetting about the Wipocalypse! Yesh, I need to get back on that during the November check-in. *derp*

Your Wipocalypse piece looks like lots of fun, Leonore.

Thank you and you're welcome - I really enjoy talking a bit about what I watch/read/play, so I'm always glad to her someone likes reading about it as well :)

Yes, confusion is so...confusing! Don't stress yourself over WIPocalypse, it's perfectly fine to skip a few entries :)

It is! Although I wouldn't mind finishing it soon, too...

Great work on your WIPs they both look wonderful!!!!!!

I'm so impressed with how everyone has been continuing onward with their stitching and knitting! I'm just now catching up on blog reading!