This time I know that at least the Gifte Gorgeousness SAL is due for a checkin, so let's just do that :D Still having a very busy time, part good busy, part stress busy, but I'm hopping along, and somehow getting in a lot of crafting time at the edges, I suspect it's what's keeping me sane, well, mostly sane, these days ;)

So let's see...my main project these days is My Day Off, a gift for Felix' mum and therefor very much part of the GG SAL. I did make a lot of progress on this again, I moved the snap to work on the upper half and finished the lady's pillow and hair, the background up to the upper edge, and that green thing is a window shutter. Now I started on her upper body, and after that it's more background again. 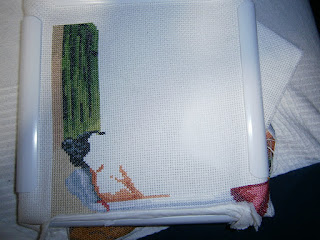 Another gift project I'm working on, although not cross stitch, is Hitchhat. This is part two of four, so it's actually knitting up pretty fast. I only have one more week to finish this, but two days of workshop next week (which basically means lots of sitting and listening for me), so lot's of knitting time. I like how the shaping is working here, you might see that better when I'm all done with the knitting and get to sewing. 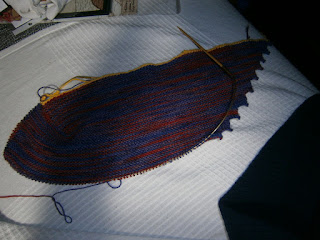 My third project doesn't qualify for GG, but nevertheless I want to share my progress with you: Here's the fourth block of our Halloween SAL by Frosted Pumpkin Stitchery. I love this little pumpkin, and he's showing up way better on the orange fabric than I dared hope for :) 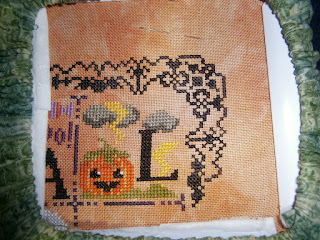 In other news, I played Magus this week. My friends kept telling me it's the worst game ever, and of course I had to see for myself - well, it's not stellar, but I did have a bit of fun for the four hours or so it lasted. It's pretty repetitive, but short enough to not get boring. They market it as an RPG, but actually it's more of a shooter, ou just press one button to do ypur magic, aim, and watch as everything perishes before you, instantly. The story is pretty cliché as well, but there are a few witty remarks I liked. I don't regret playing it, but that might be partly because I spent only 1.80€ as it was on sale.
I also finished volume 5 of the Case Closed/Detective Conan mange today. Felix and I also watched some more, more precisly E89-93. Then we started Elementary (might be because we were a bit on a Holmes trip thanks to Conan) and watched the first few episodes (1-8) of S1, and right now I'm getting into a few more episodes of Once Upon a Time (S1, E13-17). I'll probably go to bed after this one though, it's almost 2am here :)

Posted by Leonore Winterer at 01:27

I love seeing your cross stitch progress! My Day Off looks like such a fun chart. And I love your Halloween piece. Lovely work!

Thanks for taking part in GG this month. I'm glad you explained what the parts you've been stitching are!
The Hallowe'en design is so cute too.

Great progress on everything! I really think I need to get that Halloween one with the Frosted Pumpkin's current sale. It looks great on that fabric.

Everything looks great. You always make great progress on your pieces each week. Love the fabric you're doing the Halloween piece on.

Thanks :) My Day Off is a lot of fun, but I'm glad to have the Spooky SAL to switch to when the colour blocks get tiresome :D

Thanks for hosting it! It's fun to focus on one part after the other here ^_^

Thanks! Yeah, the sale sure came in handy for that, I hope you'll enjoy stitching it :)

Thank you. I'm really trying to focus on those two right now, so that helps a lot.